The Mid-American Conference announced on Monday that the Toledo men’s basketball game at MAC West Division leader Northern Illinois (13-2, 2-0 MAC) has been selected to air nationally on the CBS Sports Network.

The announcement will move the game from Saturday, Jan. 23, to Friday, Jan. 22. Tip-off time for the contest in DeKalb is 5:30 p.m. Central Standard Time. 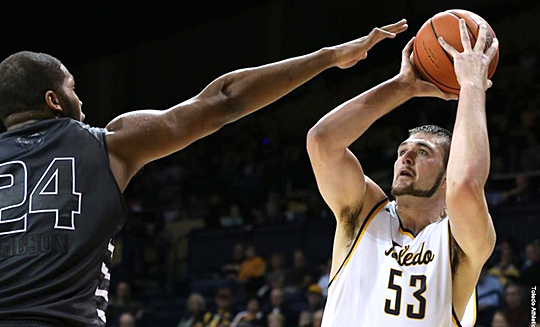 The Rockets, who are 10-5 overall and 1-1 in MAC play, also will face the Huskies on Tuesday, Jan. 12, in Savage Arena. The two teams have split their season series each of the last two years, with UT and NIU both winning in enemy territory during the 2014-15 campaign.

Toledo’s game vs. the Huskies will be its fifth televised by the CBS Sports Network this season. The first three came at the 38th-annual Great Alaska Shootout in November and the fourth will be Friday, Jan. 15, at 7 p.m. vs. Akron in Savage Arena.

The Rockets split a pair of road contests to open MAC play last week. UT dropped an 87-69 decision at Ball State Wednesday before rebounding for an 84-76 triumph at Miami Saturday.