In the wake of 2014’s water crisis in Toledo that left a half million residents without safe tap water for three days, a graduate-level class in The University of Toledo’s Department of Environmental Sciences embarked on an analysis of issues related to the measuring and reporting of microcystin in drinking water.

The resulting research recently published in the journal Environmental Science and Technology takes aim at the ELISA test kit — the standard method of measuring the concentration of the group of toxins associated with cyanobacterial blooms in Lake Erie — in order to help local government agencies responsible for providing the public with safe drinking water. 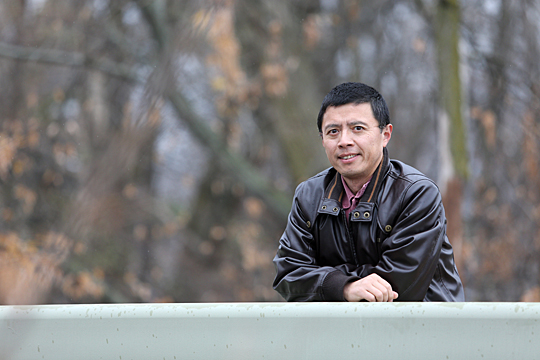 “Our goal is to come up with a way to improve the results and reduce the level of uncertainty in their decision-making process to avoid unnecessary panic,” Dr. Song Qian, UT assistant professor of environmental science, said. “Frequent and accurate quantification of cyanobacterial toxins in treatment-finished drinking water is paramount to protecting the public.”

Qian led the group of six UT graduate students and a researcher from Ohio State University as they collected monitoring data measured during the 2014 bloom season from the city of Toledo’s Water Department and OSU’s Stone Lab in Put-in-Bay.

“We formed this special topics class right after the crisis because some questioned the wisdom of issuing the ‘Do Not Drink’ advisory based on one sample exceeding the standard set by the Ohio Environmental Protection Agency,” Qian said. “We applied our knowledge to the issue that is not only of educational and intellectual value, but also highly relevant to the local community.”

After analyzing the two sources of data, the class concluded that the ELISA test can be “highly variable.”

“Such uncertainty is rarely reported and accounted for in important drinking water management decisions,” Qian wrote in the class’ report titled “Quantifying and Reducing Uncertainty in Estimated Microsystin Concentrations From the ELISA Method,” which was published Oct. 30. “The risk of exposure to the harmful levels of the toxins has not been adequately communicated.”

ELISA stands for the “enzyme-linked immunosorbent assay” method, which Qian said is used for measuring microcystin concentration in almost all Ohio drinking water facilities that utilize Lake Erie as source water. Qian calls it the most convenient and cost-effective test to use.

The ELISA test kit is the same method the city of Toledo used to measure microcystin in the raw lake water on a daily basis through the 2015 algal bloom season.

According to the published research, “Much of the uncertainty is a result of the highly uncertain ‘standard curve’ developed during each test.”

A standard curve links a microcystin concentration through a color development process to an optical density — a quantity that can be measured directly.

Qian says the problem with the current test kit is that the standard curve is developed from only five or six data points. He says unavoidable measurement errors in optical density make the standard curve variable from test to test.

“Estimation uncertainty can be effectively reduced through the effort of regional regulatory agencies by sharing and combining raw test data from their regularly scheduled microcystin monitoring program,” according to the published report.

Qian admits combining data from multiple tests is a complicated mathematical process. That is why he is looking for funding to develop easy-to-use software that would analyze monitoring data and calculate a microcystin concentration estimate based on a more stable standard curve.

“Our drinking water is safe because of the advanced treatment used in our city,” Qian said. “The decision made during the 2014 water crisis was a difficult one given the uncertainty associated with the method. By teaching the class, we want to figure out how science can help support leaders when they’re making calls during bloom seasons that could threaten public health. Reducing the uncertainty in the measured microcystin concentration will make the process easier.”

As a result of this research, Qian believes the city of Toledo made the right call issuing the “Do Not Drink” advisory in 2014 because he said, “Our microcystin estimate for that particular day is higher.”