The University of Toledo will honor the Rocket football team for its 2015 Marmot Boca Raton Bowl championship victory with a trophy presentation at halftime of the men’s basketball game vs. Akron Friday, Jan. 15.

Tipoff is scheduled for 7 p.m. in Savage Arena. 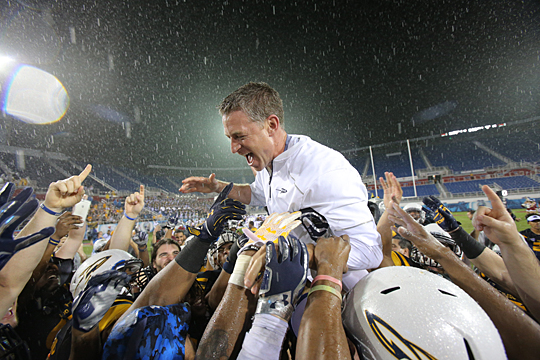 Toledo players lifted up Head Coach Jason Candle after the Rockets poured it on to beat the then-No. 24 Temple Owls, 32-17, Dec. 22 in the Marmot Boca Raton Bowl.

The Rockets defeated then-No. 24 Temple, 32-17, at Florida Atlantic University Stadium in Boca Raton Dec. 22 in Jason Candle’s debut as head coach. Senior quarterback Phillip Ely completed 20 of 28 passes for 285 yards and was named the game’s Offensive MVP. Sophomore linebacker Ja’Wuan Woodley, who had a key safety in the first half, was named the game’s Defensive MVP.

Tickets for the basketball game can be purchased at the UT Athletic Ticket Office, online or by calling 419.530.4653.