Passion, curiosity and service are baked into Brittany Jones’ DNA.

At every point of her education, Jones has followed where her heart and interests have led her. In 2016, they led her to The University of Toledo, where she is a Ph.D. candidate in the Spatially Integrated Social Science program in the Department of Geography and Planning.

Her doctoral research revolves around food systems. She is studying how the land bank transfer process affects food accessibility and food geography within the Black community in Toledo and Dayton, and how it ties into the surge in urban agriculture. She plans to defend her dissertation in the summer. 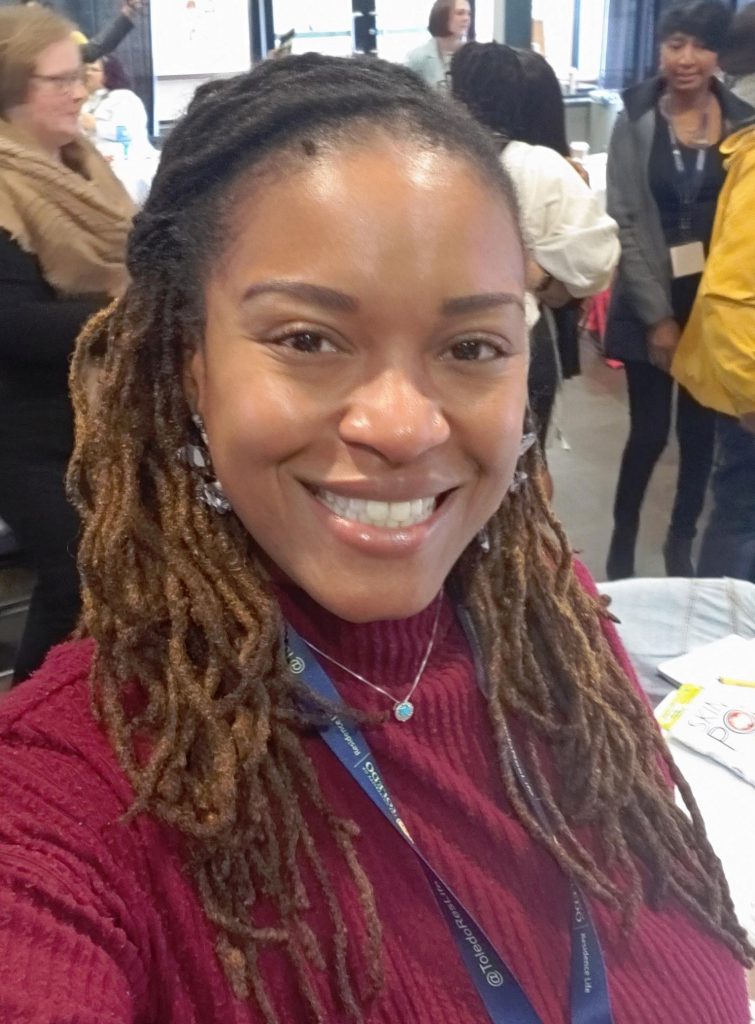 A Ph.D. candidate in the Spatially Integrated Social Science program in the Department of Geography and Planning, Jones’ doctoral research revolves around food systems.

Adding doctoral studies while trying to balance work and personal commitments has been difficult. But throughout, she has felt fully supported by the faculty in her department, ticking off each faculty member and how they have helped her.

“It feels like family. I can go to them for anything,” Jones said. “They work well together. They keep me on track and focused. And since I’m among the first in my family to go through a doctoral program, the support is crucial. The community makes it more manageable.”

Doing doctoral research can be isolating. But Jones found the antidote ― getting involved in the community and on campus.

She is the chair of the Urban Agriculture Alliance in Lucas County, an organization trying to shape urban agriculture policy, and belongs to the local NAACP and Delta Sigma Theta Sorority Inc. She also is the president of the Graduate Research Association, a member of the Black Graduate and Professional Student Association and works as a research assistant at UToledo’s Jack Ford Urban Affairs Center.

“Meeting new people, having that community as I’m going through the graduate school journey keeps me grounded,” Jones said. “I don’t have to be on campus all the time because of my research. The activities help me stay connected to the University.”

Her community activism and interest in social justice have only enriched her academic life, said Dr. Sujata Shetty, Jones’ supervisor at the Urban Affairs Center.

“She has developed a good understanding of the connections between academic and community work,” Shetty said. “Sometimes it takes a long time to figure out how your work might be relevant in a larger societal context. It’s unusual to do that so early in your career, as Brittany has.”

Jones earned her bachelor’s degree in public affairs journalism from the Ohio State University in 2009. After working in Columbus for a couple of years, she returned to Toledo, her hometown, to work for local nonprofits United North Corp. and Children’s Hunger Alliance. While working full time, Jones enrolled in a master’s program in urban planning at Wayne State University.

It was there that she learned more about food systems and began exploring such issues as food security and accessibility.

As a young girl, Jones saw neighbors and family members suffer from illnesses that made no sense to her.

“Why were they overweight? Why was my family always sick?” she said. “I didn’t understand why food was killing us when it was supposed to nourish us.”

Jones said her master’s degree opened her eyes to look at the system.

“I liked the power of how food influences society and culture,” she said. “The way the built environment influences our choices and the [cultural] foods available in certain areas. I was curious about the rebellion against the global food system and the commercialization of local food environments. This set off the explosion of urban agriculture, CSAs [consumers subscribing to the harvest of local farmers], slow foods, local foods, and other alternative food networks. That is the world I wanted to explore.”

Jones has been involved in the food community and urban agriculture for years now and is glad that others are becoming more aware. With the pandemic and people worried about food shortages, more people are starting gardens.

“They realized they can’t rely on the system anymore,” she said. “There’s more urgency about how to grow your own food. There are more programs for youth, more classes for adults.”

Jones said she wants to be a problem-solver and an educator. She’s building a consulting/research business and wants to be a resource to cities and others who want to strengthen food systems.

“Many are rushing into it without data,” she said. “I can provide that research and fill that gap.”