In partnership with NASA and its additional $11.4 million in support, a researcher at The University of Toledo is expanding his work to transform how K-12 science is taught in the United States using more hands-on experiments and direct observations to solve environmental problems.

NASA extended for five years the UToledo-led project, which began in 2015 with $10 million in funding.

Dr. Kevin Czajkowski, professor of geography and planning in the UToledo College of Arts and Letters, is spearheading the development of new curriculum that relies on helping learners of all ages do real science using the resources of NASA and education partners nationwide. 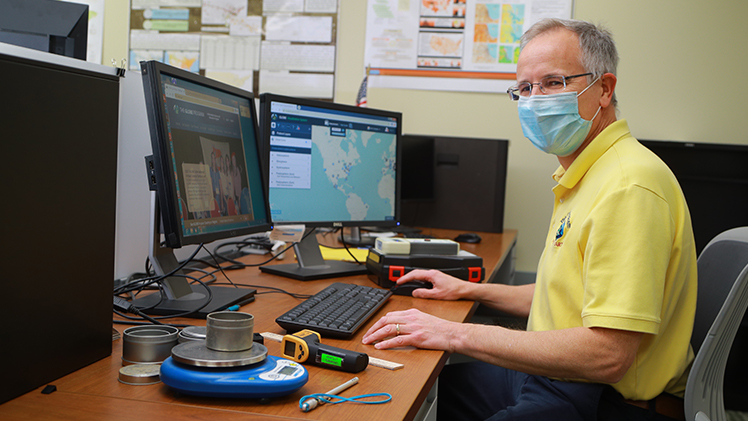 “The main goal of our program is to have students create and do real science projects — authentic science, not something staged in a lab,” said UToledo’s Dr. Kevin Czajkowski.

An average of 5,000 students each year participated in the project over the last five years from across the country.

“The main goal of our program is to have students create and do real science projects — authentic science, not something staged in a lab,” Czajkowski said. “Some of the projects students have done are very cutting edge.”

For example, a Toledo high school student worked with an air quality scientist at NASA Langley Research Center in Virginia to look at how forest fires in California affect air quality in Ohio.

“Working with a national expert in the area of air quality, the local teenager collected and analyzed data. The team discovered the forest fires made our skies murky, milky white in Toledo, but didn’t affect air quality at the surface,” Czajkowski said.

During the 50th anniversary of the Apollo 11 moon landing in 2019, the program enlisted local middle and high school students in a competition to recreate the historic lunar landing using robots and drones.

Plus, every year students from Ohio and Michigan, ranging from kindergartners to college seniors, come to UToledo to present research projects related to the Earth’s environment. The most recent conferences have continued virtually during the coronavirus pandemic.

“Being science literate is to be able to ask questions and find out information, gather data and analyze the results,” Czajkowski said. “Our project also is a way to encourage students to pursue STEM degrees.”

UToledo’s project is one of 27 funded with an annual $39 million commitment from NASA’s Science Mission Directorate to implement the next phase of Science Activation — a community-based approach to connect NASA science with students.

“NASA science seeks to serve new communities and expand connections with our premier scientists and engineers. We do that through innovative partnering, and I couldn’t be prouder of the cadre of awardees,” said Thomas Zurbuchen, associate administrator for NASA’s Science Mission Directorate.

The UToledo-led project, called “MISSION EARTH: Fusing GLOBE with NASA Assets to Build Systemic Innovation In STEM Education,” leverages the resources of both NASA and Global Learning and Observations to Benefit the Environment (GLOBE), which is an international science and education program that connects students, teachers, scientists and citizens from different parts of the world to conduct real, hands-on science about their local environment and put it in a global perspective.

UToledo’s partners in the project during the last five years include WestEd, a research and service agency in San Francisco with expertise in high school career readiness; Boston University, which has expertise in elementary and college engineering practices; and Tennessee State University, which provides its expertise in college service learning. University of California, Berkeley; NASA Langley Research Center; and the technology company Science Systems and Applications Inc. (SSAI) at NASA Goddard Space Flight Center also are partners on the project.

The team will expand to include more schools and locations nationwide through 2026.

“We’ve already started a Great Lakes campaign, working with Defiance College, Northern Michigan University and State University of New York at Fredonia,” Czajkowski said. “Our idea is to have these new partners duplicate what we’re doing here at UToledo and at Boston University, Tennessee State, West Ed and UC Berkely in California.

“All of us are creating hubs and then working with other partners in our area. We find that you need a local person to work with the teachers and students.”