Several UT students had the opportunity last fall to observe and collect data on celestial objects in a way that most astronomers don’t get to experience until well into their professional careers.

In a recent visit to the Lowell Observatory’s Discovery Channel Telescope located outside of Flagstaff, Ariz., Dr. Karen Bjorkman, dean of the UT College of Natural Sciences and Mathematics, and Distinguished University Professor of Astronomy, and her class had the opportunity to observe a number of stars, planetary nebulae and galaxies. 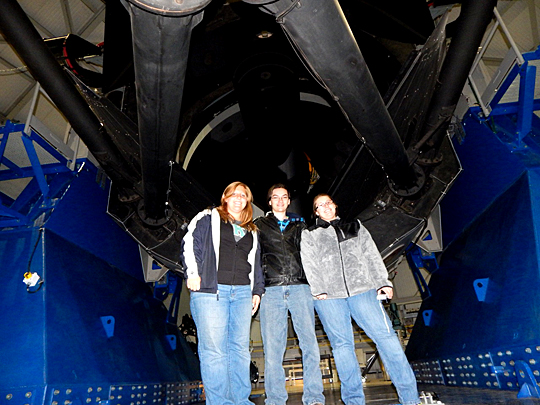 The telescope was conceived and built by the historic Lowell Observatory, where Pluto was discovered, using private funds, led by a major contribution from the Discovery Channel. It was completed and dedicated in 2012.

UT, Boston University and the University of Maryland joined in a scientific partnership with the Lowell Observatory to conduct research using the Discovery Channel Telescope, with UT joining in 2012. In subsequent years, the partnership grew to include Northern Arizona University and Yale University.

For three years, Bjorkman has taken her undergraduate Observational Astronomy class for hands-on experience with the 4.3-meter telescope. Last fall, student travel and observation was made possible by support funds from the Helen Luedtke Brooks Endowed Professorship of Astronomy.

While the class gets the opportunity to work with the 1-meter telescope at the Ritter Observatory on campus for most of the semester, the much larger Discovery Channel Telescope allows for significantly more detailed images of a wider range of objects. It is the fifth largest telescope in the continental United States and one of the most technologically advanced, and its location within the Coconino National Forest offers the clear dark skies that are crucial for observing the cosmos.

“I try to integrate the use of the Discovery Channel Telescope with everything else we do in the class,” Bjorkman said. “They learn the basic techniques of observing at our own Ritter Observatory, and they learn about the process, we talk about all the techniques, and they prepare their own mini-research project. During the semester, we talk about the different instruments that astronomers use.”

Bjorkman explained the camera on the Discovery Channel Telescope, called the Large Monolithic Imager, makes it easy to take data even on very faint and distant objects. Each student is required to select an object in the sky to observe during the visit, and that object becomes the focus of his or her final project.

“For my project, I chose a reflection nebula, NGC 7023,” said Jessica Moore, a senior astronomy student. “This experience helped me with the project by letting me gather my own data. I was able to see everything that goes into an actual science image from start to finish. It also gave the data some passion because we are the ones collecting it.”

Graduate students also are able to request time at the telescope, and one joined Bjorkman’s class. Cody Gerhartz, a fifth-year graduate student working with Bjorkman toward a doctorate in physics with a concentration in astrophysics, is monitoring a set of hot stars with gaseous disks that are found in star clusters. Through long-term observations, he’s working to determine more information about the processes of formation and evolution of the disks.

“I was among the first group of students from UT to get to experience the Discovery Channel Telescope and have since been out there around seven times,” he said. “Trips to the telescope are always a great break to the norm, getting out of the office and into some truly beautiful locales, not to mention the chance to look at a true dark sky. An opportunity like this is not something everyone has, making the Astronomy Department at UT a unique experience.”

Additionally, Bjorkman is working on some of her own research with Dr. Noel Richardson, a postdoctoral research associate and UT alumnus. Bjorkman’s interests are focused on stars with disks of gas around them. Some of the stars lose the disks and later grow new ones, she explained, but no one knows why. She has been observing approximately 10 star clusters with these features and monitoring the stars in the clusters to find evidence of the changes.

“We want to understand the process,” Bjorkman said. “What goes on to cause a star to lose a disk or grow a new one?”

Richardson had the opportunity to work on some of his own research as well — specifically a supernova that was discovered about six months ago: “This particular star was a massive star that underwent a large ejection of matter earlier in the year. Until recently, astronomers did not know that such ejections could occur near the end of a massive star’s lifetime.”

Previously, Richardson observed the star as it exploded from an observatory in Quebec, but he was unable to continue observing it as it went behind the sun. Through his research at the Discovery Channel Telescope, he’s been able to confirm that it is acting like a supernova now, and the observations collected will help determine if the explosion created any dust.

Bjorkman said that while the opportunity to use a new telescope is exciting, the partnership aspect of the agreement also is extremely beneficial to the University.