“Our men’s basketball program continues to grow and set new standards for excellence under Tod’s leadership,” O’Brien said. “His teams won outright Mid-American Conference titles in each of the past two seasons, and have consistently been among the among the elite programs in the league during his tenure. Just as importantly, Tod is a great leader and mentor who first and foremost cares about his players as student-athletes and as individuals.” 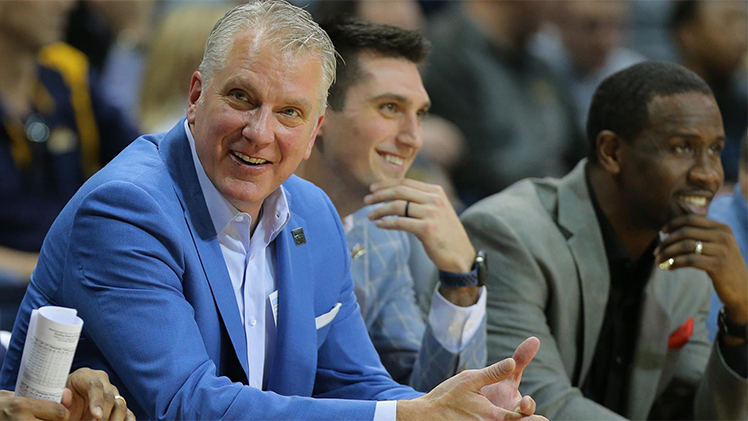 Kowalczyk, in his 12th season as head coach for the Rockets, is the first coach in Toledo men’s basketball history to lead his team to consecutive outright league titles.

O’Brien, who is retiring on April 30, said the decision to extend Kowalczyk’s contract was made in consultation with incoming Vice President/Director of Athletics Bryan Blair, who assumes his post on May 1.

“Bryan and I spoke at length on this topic, and we are both fully supportive of extending Tod’s contract,” O’Brien said.

Kowalczyk, in his 12th season as head coach for the Rockets, is the first coach in Toledo men’s basketball history to lead his team to consecutive outright league titles. The Rockets head into this week’s Mid-American Conference Tournament as the No. 1 seed and hold a 25-6 overall record, and a school-record 17-3 in MAC play. A year ago, Toledo was 21-9, 15-4 in the conference, and Kowalczyk was named the MAC Coach of the Year. He is second on the school’s all-time victory list with 230 wins, trailing only legendary coach Bob Nichols (376 wins from 1965-87).

“I am extremely appreciative for the continued support of President (Gregory) Postel and Mike O’Brien, and I would also like to thank Bryan Blair for the role he played in this extension,” Kowalczyk said. “We have built one of the top mid-major programs in the country, and a big part of that is due to the tremendous University and community support we receive. Our coaching staff and student-athletes will strive to continue to build on our successes.”

Consistency has been the hallmark of Kowalczyk’s coaching career. He has guided the Rockets to 20 or more wins six times in the past nine seasons, and has 192 victories to his credit during that period – a total that ranks second among MAC schools. In addition to the league titles the past two seasons, Kowalczyk has also led the Rockets to MAC regular season or division crowns in 2012-13, 2013-14, 2017-18 and 2018-19. The 2013-14 team won a school-record 27 games, one of three teams under his leadership that won at least 25 games. He has led Toledo to five post-season appearances and two berths in the MAC Championship Game.

In addition to winning on the court, the Rockets have also achieved tremendous success in the classroom under Kowalczyk. The Rockets have garnered the National Association of Basketball Coaches Team Academic Excellence Award in six of the last eight seasons. Toledo has also ranked in the top two in the MAC in Academic Progress Rate four of the last five years, highlighted by league-best marks in 2015-16 and 2016-17. The Rockets have posted at least a 970 APR in each of the past seven years.

Prior to becoming UToledo’s head coach, Kowalczyk posted a 136-112 record in eight years as Wisconsin-Green Bay’s head coach. The Phoenix advanced to post-season play and notched back-to-back 22-win campaigns in his last two seasons. In addition, every player who completed their eligibility while Kowalczyk was Green Bay’s head coach received a degree.

A native of DePere, Wis., Kowalczyk and his wife Julie have two children, Race, 15, and Rose, 13.