The victory moves the No. 1 seed Rockets (21-7) into the semifinals against No. 5 Ohio, which beat No. 4 Kent State, 85-63, Thursday afternoon. The game tips off at 5 p.m. Friday, March 12, and will be broadcast on the CBS Sports Network, with Rocket Radio Network’s local coverage on WSPD-AM 1370. 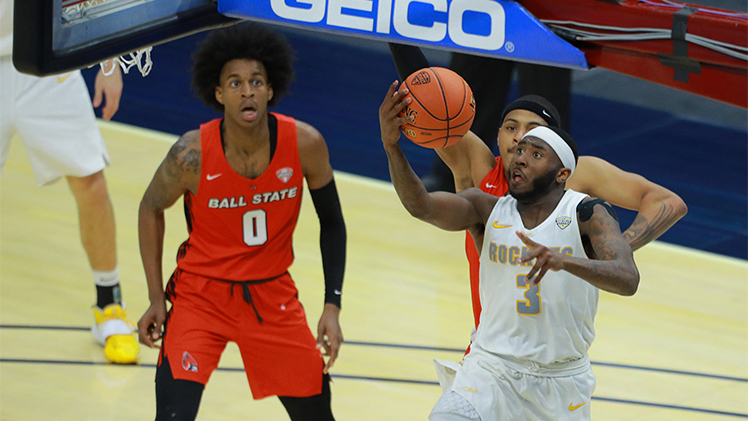 “It was a grind-out win for us,” Head Coach Tod Kowalczyk said. “We had a great start and came out with a lot of energy. I thought it was a well-played game by both teams. We showed a lot of mental toughness when Ball State came back to tie it and then went ahead by five points in overtime.”

Jackson, the MAC Player of the Year, added six rebounds, four assists and three steals, and made a career-high 11-of-12 free throw attempts. He led a balanced attack, with five Rockets scoring at least 12 points. Junior JT Shumate added 16 points, while freshman Ryan Rollins scored seven of his 14 points in overtime.

No. 8 seed Ball State (10-13) sent the game into overtime with a layup at the buzzer by Jarron Coleman. The Cardinals took their first lead of the game by scoring the first five points in overtime, but Toledo answered by outscoring BSU 12-5 the rest of the way. Rollins’ three-pointer at the 2:38 mark gave Toledo an 85-84 lead. He followed that up with a pair of buckets that pushed the lead to 91-86 with less than a minute to play.

The Cardinals trailed by two points and had one last chance when Miryne Thomas intentionally missed the second of two free throws with 0.8 seconds on the clock. Brachen Hazen’s tip-in attempt was no good though to give Toledo the victory.