The moment Alexander Belaia-Martiniouk read the words inside his envelope, he let loose a joyful yell that rose above the already boisterous chatter inside the Stranahan Theater’s Great Hall.

Belaia-Martiniouk, a fourth-year medical student at The University of Toledo College of Medicine and Life Sciences, had matched in emergency medicine with New York-Presbyterian Brooklyn Methodist Hospital in New York City. 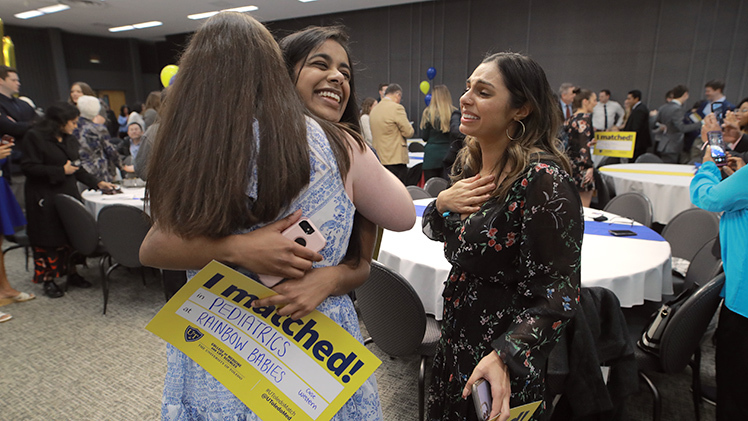 Match Day is one of the most anticipated moments for medical students at UToledo and across the country.

“I’ve been waiting for this moment for a long time. This is where I wanted to be,” he said. “I put this No. 1 and it’s just nice to see a place wanted you just like you wanted them. It’s a great feeling.”

The first-generation American was one of 167 UToledo students who learned on Friday where they will carry out their residency after graduation.

Belaia-Martiniouk, whose family is originally from Belarus, said he wanted to be a doctor since he was 7. After graduating from Duke University, he came to UToledo to pursue that dream.

“I think The University of Toledo College of Medicine and Life Sciences has prepared me well,” he said. “I’m excited for the next step of my journey.”

Match Day is one of the most anticipated moments for medical students across the country.

In addition to the students who learned their residency placement on Friday, four students had already matched with the U.S. Armed Forces, three in urology and one in ophthalmology, bringing the total match to 175 students.

“It just takes my breath away to see these students who’ve worked so hard for four years be rewarded with these wonderful residency matches,” said Dr. Randall Worth, professor and senior associate dean for student affairs and admissions in the College of Medicine and Life Sciences. “I’ve got the greatest job in the world watching these individuals go through medical school and having a chance to help them.”

Fourth-year medical students spend months interviewing with hospitals and universities across the country to determine where they want to continue their medical training on the path to becoming an attending physician.

Students rank their top destinations, and academic and community-based health systems rank their top student choices. A computer algorithm administered by the National Resident Matching Program then matches students and residency programs together. 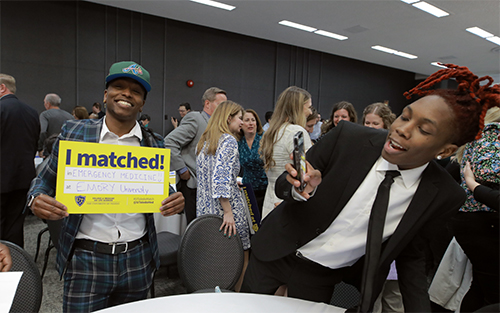 Antonio Jackson, left, will embark on an emergency medicine residency at Emory University in Atlanta, where he grew up.

“It was a whirlwind of emotion, honestly, starting when we applied,” said Rayna Patel who matched in internal medicine. “There’s a lot of stress, nerves and anxiety but ultimately, it’s so joyous. There’s so much to celebrate. We’ve come so far, and we still have a journey ahead, but this is super exciting.”

Patel, who grew up in the Detroit area, was one of 20 students who matched with the UToledo College of Medicine and Life Sciences.

“The group I’m joining, internal medicine, the residents and faculty have always been so great and treated me so well,” she said. “I’ve already got a great foundation. I’m super excited to stay here.”

Among the institutions where UToledo students matched were Harvard, Yale, Duke, the Cleveland Clinic, Texas Southwestern and Emory, where Antonio Jackson will embark on an emergency medicine residency.

For Jackson, who grew up in suburban Atlanta, going to Emory is a homecoming of sorts.

“It was my No. 1 choice. I can’t really put it into words,” he said shortly after learning where he matched. “It’s a full-circle moment. I went away from home for school and now I get to come back and serve where I was raised.”

Joining Jackson in the celebration were his father and mother — herself a nurse at Emory.

“It’s amazing to have my parents here,” he said. “Having them as my support system, I can’t ask for better parents.”