Shalini Tallamraju and Ava McQuillin were exposed to the world of medicine at a young age, which might explain why they both are pursuing careers in the medical field.

Tallamraju and McQuillin, freshmen on the Toledo Women’s Tennis team, are drawn to the study of medicine from opposite directions. Tallamraju’s mother, Anju, is a family physician in her hometown of Munster, Ind. 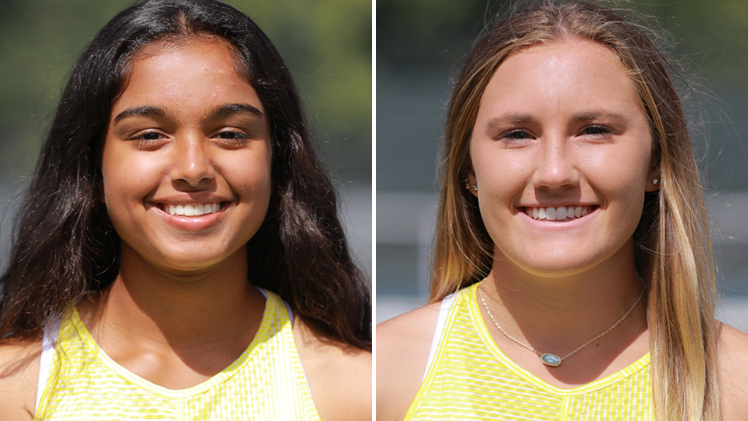 Shalini Tallamraju, left, and Ava McQuillin, freshmen on the Toledo Women’s Tennis team, are drawn to the study of medicine from opposite directions.

“My mother was a role model to me,” Tallamraju said. “I saw how she really wanted to help people and saw her passion for that, which generated my interest in medicine.”

McQuillin, on the other hand, viewed the world of medicine from a patient’s perspective.

“I was born with kidney problems, so, since a very young age, I’ve been in and out of the hospital with frequent kidney infections,” said McQuillin, who grew up in nearby Waterville and attended Central Catholic High School. “When I was around 12 years old or so, I had kidney surgery. So being around doctors for pretty much my entire life has led to me having close connections to those doctors and made me want to help people in the same way they helped me.”

Tallamraju and McQuillin’s also share an interest in tennis. They arrived at Toledo with accolades and high expectations. McQuillin was a three-time conference Player of the Year and a four-time state tournament qualifier at Central Catholic. Tallamraju was a three-time first-team all-state honoree in Indiana.

Their coach at Toledo, Tracy Mauntler, has been impressed with the academic and athletic motivation of her freshmen.

“Shalini comes from a high-achieving family,” Mauntler said. “I could tell from early on in the recruiting process. She was almost more ahead of the game than I was. ‘Really driven’ would be the best way to describe her.

“I’ve known Ava for a long time and I can tell you she is also very driven. On her unofficial visit, we went to see the medical college, which I’ve never done with a recruit. Normally, we focus on the undergraduate level but she really wanted to see the medical school. She was someone who knew right away that she wanted to be a neurosurgeon, and at age 17 if you’re able to figure that out, it’s pretty impressive.”

Both players said they thrive on challenges, whether on the court or in the classroom.

“I’ve always liked the grind,” said Tallamraju, who plans to focus on a career related to sports medicine. “Yeah, it can get tiring sometimes but I think I like how much I have to work. There’s always going to be certain obstacles, but you just have to get through them. It’s always one step at a time.”

“I’m definitely a perfectionist,” added McQuillin. “I’m also an only child, so I’ve always had to hold myself to a high standard.”

McQuillin and Tallamraju are aware of the steep climb that stands before them. But they will have the advantage of leaning on each other for support.

“We take a lot of the same classes already,” said McQuillin. “It’s super nice knowing that someone else has the same heavy workload of being a pre-med major and a student-athlete.”