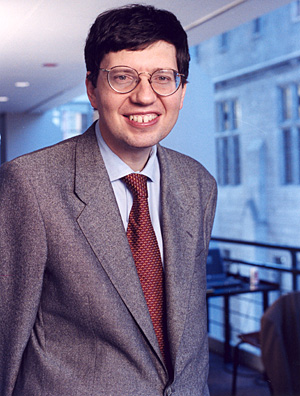 McGinnis will show that the majority’s approach is correct, because the First Amendment reflects a distrust of government and thus requires judicial constraint, which adherence to general First Amendment principles provides.

“Campaign finance regulation is perennially front-page news,” said Lee J. Strang, the John W. Stoepler Professor of Law and Values at the UT College of Law. “Professor McGinnis will argue that, contrary to frequent claims, the Roberts Court is neutrally following the First Amendment in its campaign regulation cases, including in Citizens United. McGinnis’ lecture is sure to spark thought and conversation on this important topic.”

McGinnis is the prolific author of more than 70 law review articles and dozens of essays. Most recently, he wrote Accelerating Democracy: Transforming Government Through Technology (Princeton 2013) and co-authored with M. Rappaport Originalism and the Good Constitution (Harvard 2013). He is a past winner of the Paul Bator Award given by the Federalist Society to an outstanding academic under 40.

Prior to teaching, McGinnis was deputy assistant attorney general in the Office of Legal Counsel at the Department of Justice. He is a graduate of Harvard College and Harvard Law School, and holds a master of arts degree in philosophy and theology from Balliol College, Oxford.

The Stranahan National Issues Forum is a joint program of the UT College of Law and its chapter of the Federalist Society for Law and Public Policy Studies. It is made possible by an endowment from the Stranahan Foundation. The forum’s purpose is to address issues of national importance through the lens of the American legal system, and McGinnis joins a long list of high-profile speakers who have delivered the Stranahan Lecture at the UT College of Law.