The University of Toledo Title IX Office is promoting Sexual Assault Awareness Month during the month of April by hosting both virtual and in-person events. 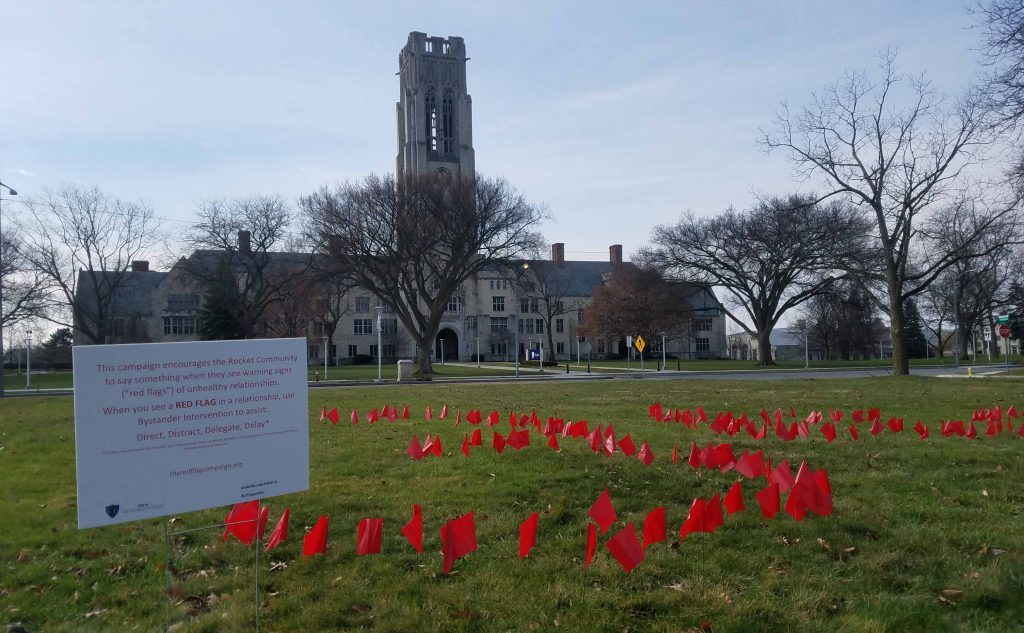 The UToledo Title IX Office is promoting Sexual Assault Awareness Month throughout April, including the Red Flag Campaign, which calls attention to the number of Toledo Police Department reports of domestic violence filed the previous year.

“We put these flags in a high-traffic area such as Centennial Mall to encourage people to stop and reflect about the issue or talk about it with their peers,” said Lindsay Tuttle, sexual misconduct prevention education coordinator for Title IX.

“We want to continue to have a conversation of what healthy and unhealthy relationships look like. Ultimately, we want to encourage people to reinforce their commitment to safety, continue the discussion and join the fight against sexual violence.”

The Red Flag Campaign is rooted in the bystander intervention strategy to bring attention to and address dating violence, stalking and sexual assault. The Red Flag Campaign website notes that it, “encourages friends and other campus community members to say something when they see warning signs (‘red flags’) for sexual assault, dating violence or stalking a friend’s relationship.”

The Title IX Office also is hosting the art installation “What Were You Wearing?” which features a collection of survivors’ stories and recreations of the outfits they were wearing at the time of their assaults. The exhibit runs Monday, April 12, through Thursday, April 15, at the Carlson Library in room 1005; face masks and social distancing are required.

There will be an opening virtual reception featuring remarks from campus senior leadership about Sexual Assault Awareness Month and the exhibit beginning at 2 p.m. April 12 via Zoom. Information regarding the kickoff can be found on the event’s Invonet page.

The Title IX Office is additionally planning virtual Lunch and Learns and several Bystander Intervention and Consent Culture trainings during the month of April. More details about those events will be released soon.

For information about Title IX or where to report an incident related to Title IX, visit the UToledo Title IX website.

Additional resources for students, faculty and staff can be found on the Sexual Assault Education and Prevention Program website.