The University of Toledo Department of Theatre and Film will present the Tony Award-winning musical, “The 25th Annual Putnam County Spelling Bee,” April 7-10, 15-16 and 22-24 at the UToledo Center for Performing Arts Center Theatre.

For the first time since 2020, audiences will be at full capacity and student actors will perform without masks. 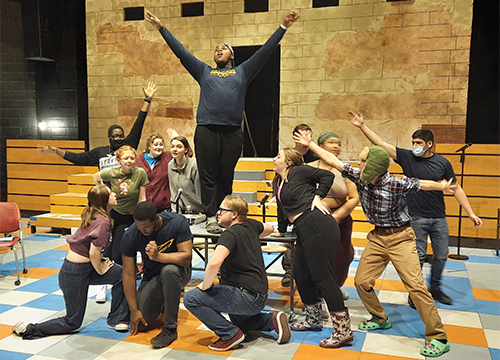 The cast of the ‘The 25th Annual Putnam County Spelling Bee’ during an early rehearsal of the Tony Award-winning musical.

“For our first play back, this big-hearted musical comedy is a really special piece for both our students and audiences,” said Dr. Matt Foss, associate professor of theatre and film and director of the musical. “It features an ensemble of misfit kids trying to belong in a world that doesn’t always see value in their imaginations or idiosyncrasies — especially their ability to spell incredibly difficult words.”

The musical features audience “spellers” who come on stage and compete for the chance to be the Putnam County Spelling Bee Champ. Audience members are encouraged to sign up in the lobby before each show.

“This musical is a fun and light way to say goodbye to a couple of tough years,” said Dr. Edmund Lingan, acting chair of the UToledo Department of Theatre and Film. “I know everyone will enjoy it. It’s a lot of laughs.”

“Our musicals typically have lighter houses early in the run and we end up turning folks away in the later weekends of the run, so we encourage those interested in the show to book tickets early,” Foss said.

Tickets cost $15-$25 and are available immediately prior to the performance or online in advance at the Tix sales website.

Visitors to campus who don’t have a parking pass can visit the ParkUToledo website for parking options, including parking in a metered space or using the ParkMobile app to pay hourly to park.

For a full list of the UToledo cast and crew, go to the Department of Theatre and Film’s website.