The University of Toledo Ritter Planetarium is showing several new immersive shows in full dome starting in April including “Zula Patrol: Under the Weather,” a program for children featuring heroes and villains who learn all about weather — here on Earth and on other planets.

The planetarium portion of the program lasts approximately one hour, consisting of both the show and a Q&A session. Weather permitting, the evening shows will be followed by observing at Brooks Observatory atop McMaster Hall to view the stars and planets through UToledo’s Celestron 14 Edge HD telescope. 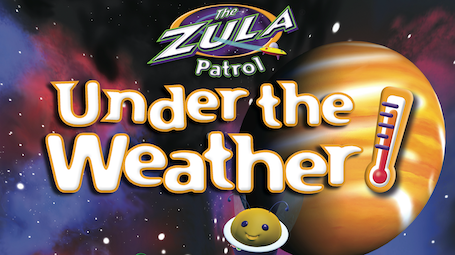 ‘Zula Patrol: Under the Weather,’ a program for children, is featured Saturdays at 1 p.m. from May 7 through May 28.

“Dynamic Earth” is featured at 7:30 p.m. Fridays through April 29. The show explores the inner workings of Earth’s life support system: the global climate. With visualizations based on satellite monitoring data and advanced supercomputer simulations, this cutting-edge production follows a trail of energy that flows from the sun into the interlocking systems that shape our climate: the atmosphere, oceans and the biosphere.  Audiences will ride along on swirling ocean and wind currents, dive into the heart of a monster hurricane, come face-to-face with sharks and gigantic whales and fly into roiling volcanoes.

“Two Small Pieces of Glass” is featured at 1 p.m. Saturdays through April 30. The program traces the history of the telescope from Galileo’s modifications to a child’s spyglass — using two small pieces of glass — to the launch of NASA’s Hubble Space Telescope and the future of astronomy. It explores the wonder and discovery made by astronomers throughout the last 400 years. Audience members explore the Galilean Moons, Saturn’s rings and the spiral structure of galaxies as well as learn about the future of astronomy.

“The Hot and Energetic Universe” is featured Fridays at 8:30 p.m. from May 6 through May 27. The program presents the basic principles of electromagnetic radiation and the natural phenomena related to high-energy astrophysics, which plays a key role in understanding the hot and violent universe. The show opens a window into the hot gas in clusters of galaxies, which are the most massive objects in the universe, and the hot gas accreting around supermassive black holes in the centers of galaxies. It also provides information about our own galaxy, including neutron stars, supernova remnants and stars like our sun, which emit copious amounts of high-energy radiation.

“Zula Patrol: Under the Weather” is featured Saturdays at 1 p.m. from May 7 through May 28. The program presents heroes of the Zula Patrol, who are on an expedition to collect samples of weather for scientist Multo’s research. When the Zula Patrol inadvertently hurts the feelings of their loyal pet, Gorga, he decides to leave Zula and find another planet to live on. Villain Dark Truder then tricks Gorga into helping with his latest scheme to rule the universe. The Zula Patrollers find out and go after him — in the process learning all about weather, both here on Earth and on the other planets of the solar system.

Admission to the programs is $8 for adults and $6 for children, senior citizens and UToledo community members. Doors will open 30 minutes prior to the show.

For more information about the spring programs, visit the Ritter Planetarium website.