With her May Commencement only weeks away, Kait Pence, a 22-year-old media communication major active in the student-produced news program, UT:10 News, considered why she chose The University of Toledo.

That the beauty of the campus called to her was an initial factor.

So was the fact that her father received his business degree from UToledo.

Also important, Pence, who is from Livonia, Mich., was able to receive financial assistance because of her high school grades and test scores.

It was the University’s broadcast productions of live sporting events for ESPN, which are primarily operated by students taking courses in television production in the Department of Communication, and student-produced news program that cinched her decision.

Those hands-on opportunities worked out quite well for her.

Pence and her colleagues at UT:10 News were recently honored by the Broadcast Educators Association’s Festival of Media Arts with an Award of Excellence in the TV News Magazine category. The award was specifically for the “2020 News Election Day” newscast.

“The fact that UT:10 was recognized nationally is outstanding,” she said. “Hopefully the national recognition will bring more students into the already fast-growing media communication field here at UToledo.”

It was only a year ago that Pence joined the weekly program’s staff as a student reporter.

Almost all of the show’s production is handled by students, she said, with the guidance of faculty. They develop and pitch their stories, then shoot their own footage and write their own scripts.

And during the UT:10 News broadcast, students handle everything. Prior to the pandemic, students were behind the newscast’s three cameras and ran audio and the teleprompter, with a student director to figuratively and literally call the shots. 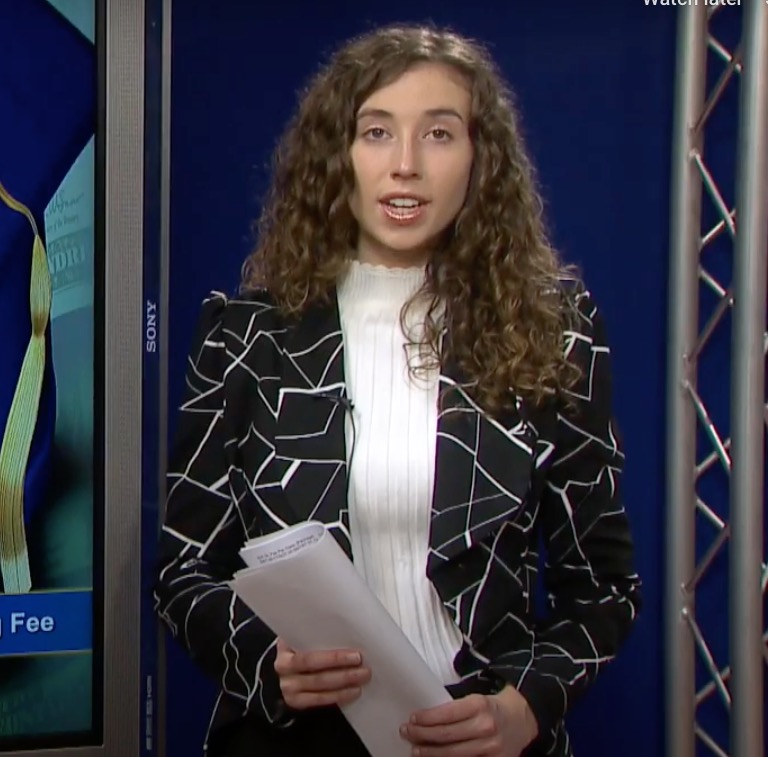 Kait Pence and her colleagues at UT:10 News were recently honored by the Broadcast Educators Association’s Festival of Media Arts with an Award of Excellence in the TV News Magazine category.

“The two students with the highest grades each week get the opportunity to be anchor the following week,” Pence said, “and there is a sports rotation, so each student will do a sports report once. There is also a live shot rotation. This way students are gaining valuable experience while getting a bit out of their comfort zone.”

This year Pence, along with all the students at UT:10 News, was challenged with something she had never considered: covering UToledo while not on campus.

“It was quite interesting and surprisingly not that difficult to switch from reporting on campus to reporting at home due to the lockdown,” she said.

It went so well for her, in fact, that halfway through the semester she was offered the producer position for fall 2020 and spring 2021 by Dr. Jackie Layng, professor in the Department of Communication and UT:10 News creator.

“I absolutely love being a producer. It is really an indescribable experience. I love editing scripts and helping student reporters make their writing more concise. It is such an exciting responsibility to stack newscasts and help make stories better and easier for the viewer to watch and understand.”

She added that UT:10 News helped her growth as a journalist, in particular, providing a better understanding of the role of a news producer. And that, in turn, gave her a specific career focus, with the help and guidance of Layng and Dee Drummond, senior lecturer in the Department of Communication.

“It was when Jackie offered me the producer position that I found a goal. I want to be a news producer and work my way up to news director. I would like to get my M.A. and Ph.D. and become a professor of media communication. Jackie and Dee have inspired me.”

Layng was quick to reciprocate her appreciation for Pence.

“Kait has been a joy to teach and as I have seen her grow as a journalist, she has also helped me grow as a teacher,” she said.

“I have worked with thousands of students at the university, and I can truly say she is a special person who cares about seeing justice served by speaking truth to power. That is something rare and gives me great hopes for the future of our country.”