Tickets for next month’s Battle of I-75 baseball game in downtown Toledo go on sale Wednesday, April 21, at 11 a.m.

The University of Toledo will play Bowling Green State University at Fifth Third Field on Friday, May 14, at 7 p.m.

The programs announced last week an annual game between the Rockets and Falcons to be played at the home of the Toledo Mud Hens. 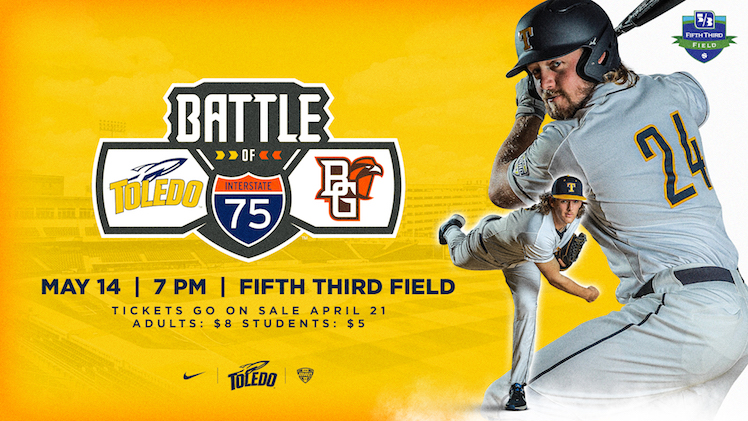 Toledo will serve as the home team in 2021, with the home team designation alternating between the two universities in subsequent seasons.

This iteration of the Battle of I-75 will be the first game in a four-game series hosted by the Rockets, with the other three games being played at Scott Park. Both teams will play a seven-inning doubleheader on Saturday, May 15 and the series will conclude with a Sunday afternoon contest. All four games in the weekend series will be televised locally on BCSN.

Ticket sales begin at 11 a.m. Wednesday, April 21 and can be purchased through the Toledo Mud Hens ticket office online. General admission tickets are $8 and $5 tickets are available for high school and college students. Concessions will be available at the game.

“The Toledo Mud Hens are committed to promoting baseball at all levels of play from Little League to the collegiate level,” said Mud Hens Executive Vice President and General Manager Erik Ibsen. “We have worked to bring this rivalry game to Fifth Third Field and we are excited to showcase these two Division I programs and players, not only this year but in the years to come.”

“Anytime you can play at a first-class Minor League Baseball facility, it’s a great experience for the players and the program,” he said. “It’s even more exciting to be able to play this game against our rivals at Bowling Green. It should be a fantastic event for both programs and the city of Toledo.”

Bowling Green Head Coach Kyle Hallock added that the game “is a great opportunity for the Northwest Ohio baseball community to come together and watch college baseball at a first-class ballpark.

“Playing in one of the best professional facilities in front of our surrounding community members is going to be a memorable experience for everyone in uniform,” he said. “Thank you to the Mud Hens for working with us to get this game done. The Battle of I-75 deserves a stage like Fifth Third Field and it’s another step forward for baseball in the 419.”