At the age of 25, Kyle Jakob is completing one major life goal even as he begins another.

Jakob is graduating in a few weeks with a bachelor’s degree in communication studies and a minor in marketing. And then he will join the University of Michigan’s master of arts in higher education and master of public policy program.

But following Jakob’s graduation from Start High School in 2015, his completing a bachelor’s degree let alone pursuing a master’s degree was beyond fathomable.

“I was a horrible student in high school,” Jakob said. “Entering college, I knew this would be a challenge for myself.”

Fortunately, he had the opportunity to prove his mental resilience and physical stamina through the Armed Forces.

After high school, Jakob enlisted in the Army as a parachute rigger and spent 3.5 years on active duty stationed with 1 Special Forces Group (Airborne) Group Support Battalion at Joint Base Lewis–McChord in Washington, and later was stationed in Japan.

“The Army really gave me stability and confidence in myself to know that I can achieve anything, despite what others think and the difficult circumstances that arise,” Jakob said. “And it gave me the discipline to achieve the goals and tasks that are in front of me.”

Following his enlistment, Jakob enrolled in The University of Toledo and put his newfound confidence to the test in a different way: as a student.

“I chose The University of Toledo because I wanted to be close to home and family,” he said. “I also knew that the University would be a way for me to have a fresh start.”

At UToledo, Jakob said he was fortunate to work in the Military Service Center as a peer advisor in the PAVE program, and to help other veterans and military-connected students transition and gain the resources needed for them to be successful in the classroom and community just as he did.

He also served as president of two student organizations, The Launchpad and Student Veterans of America.

“That really helped me build on the leadership skills I developed in the Army,” he said. “The best moments of being a Rocket, in fact, would have to be my time as president of both Launchpad and SVA.” 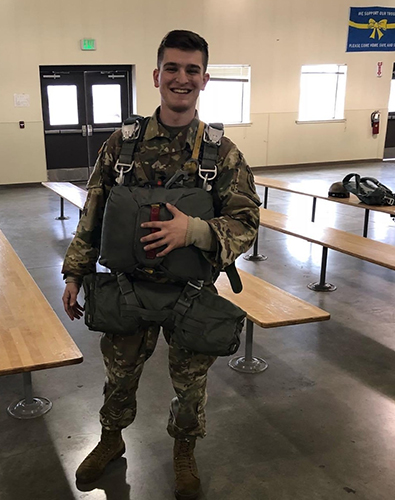 After high school, Kyle Jakob enlisted in the Army as a parachute rigger and spent 3.5 years on active duty.

Eric Buetikofer, UToledo director of military and veteran affairs, said he got to know Jakob at the end of 2019. And has been nothing short of impressed with his development as a student, employee and as a person.

“I was immediately impressed with his knowledge of the University and his ability to work with military-connected students,” Buetikofer said. “Since then, I have had the opportunity to work with Kyle on an almost daily basis in his position as a VA work-study employee. I have seen many examples of his talents, and his honesty, intelligence and leadership outweigh that of any other student I have had the good fortune to work with.”

As with all student journeys, Jakob’s path has had obstacles to overcome, with his biggest challenge, the death of a beloved uncle, coming during his freshman year.

“It was easily the hardest challenge I have ever faced and if it were not for my schoolwork to give me direction during this time, I’m not sure how I would have gotten through that grief,” he said. “That semester and the following summer and fall semesters I was able to use school to focus on things and as a healthy distraction to help me cope with the grief related to losing a loved one.”

And now, as Jakob relishes the recognition of his hard work on May 7, the “horrible” high school student said he is now confident in his future as he works toward a Ph.D., something he never would have considered years ago.

“I think all the experiences I had at The University of Toledo in and out of the classroom have prepared me to be successful in my future career in student services and life in general,” he said. “The faculty and staff at the University of Toledo have all been very supportive and helpful and given me the resources and skills that I can carry into the next chapter of life and continue the success I had while at UToledo.”