Renovations to the east side of the Glass Bowl stadium will include new concession facilities, rest rooms, entry ways and a ticket booth, as well as an overall facelift to the façade near Stadium Drive. There also will be updates to the visitors’ locker room. A new FieldTurf playing surface also will be installed on the Glass Bowl field. Work on these projects is underway. 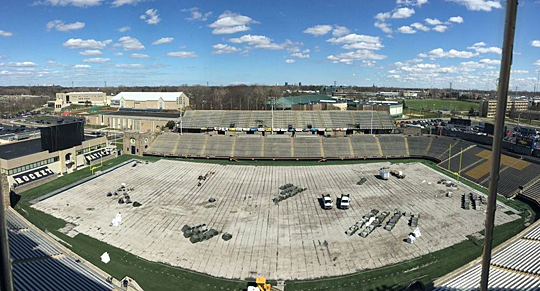 A new FieldTurf playing surface will be installed on the Glass Bowl field.

At the same time, Savage Arena will undergo an expansion that will create new offices and work spaces for the men’s and women’s basketball staffs, as well as an expansion of the Joe Grogan Room. The basketball offices will be built at the concourse level on the south end of the arena, directly beneath the expanded Grogan Room. The Grogan Room will be expanded toward the south, substantially increasing its current size. The addition also will create the potential for a future training table that would address the nutritional needs of UT’s almost 400 student-athletes. This project will begin within the next few weeks. 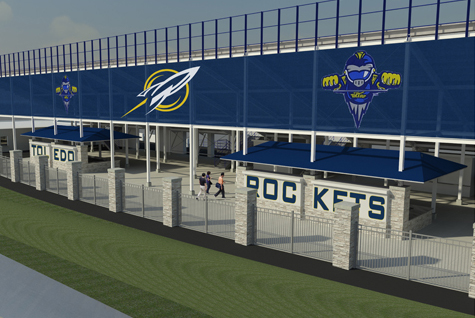 This rendering shows what the new façade on the east side of the Glass Bowl may look like.

O’Brien said that the two projects will address the most pressing needs for both facilities.

“The east side of the Glass Bowl has needed improvements and updates for some time now, especially in the concession and rest room areas,” O’Brien said. “I’m confident that fans who sit on the east side of the stadium will appreciate the new amenities in that area.

“The Savage expansion project will address two needs. First, we needed to do something about the lack of office space for our athletic staff in Savage Arena. By creating new offices for our basketball programs, it not only provides them with an improved working area, it also creates additional much-needed office space for other staff members who will move into their vacant offices. Second, the popularity of the Grogan Room has made it necessary for us to expand that area. We will be able to accommodate more of our fans and supporters on game night, and we will also be better able to host other functions in that venue, as well.”

For information on how to become involved in the project, contact Senior Associate Athletic Director Dave Nottke at david.nottke@utoledo.edu.