When senior softball player Aubrey Reed walks across the stage at The University of Toledo commencement ceremony on May 7, she will be one step closer to fulfilling her dream.

“I have had many people motivate me throughout my career, beginning with my parents and then later my coaches,” said Reed, a catcher for the Rockets.  “They not only did everything they could to make me a better person on the field, but they supported my accomplishments off the field as well.”

That support and encouragement began at a very early age. When Reed was 7 years old, her parents, Eric and Amanda Reed, took her to try out for a local softball team that was seeking one more player to fill its roster. The head coach at the time, the late Danny Meadows, saw something special in Reed and welcomed her on the team.

A season later, Meadows introduced Reed to basketball, one of the few sports available to youngsters in her hometown of Birchwood, Tenn. Reed gave basketball a try, but decided to stick with softball. That turned out to be a good decision as she ultimately became a Division I softball player at The University of Toledo.

“I like to be an optimistic person and say that whatever sport I chose I would have found a way to be successful,” Reed said. “I discovered my love to compete and challenge myself. Softball gave me ample ground to do just that; thus, I continued to stick with it.”

In addition to wanting to play softball in college, Reed was equally committed to finding a school that would allow her to pursue an academic course in the study of medicine. The University of Toledo College of Pharmacy and Pharmaceutical Sciences was the perfect choice for her.

“I was always intrigued by the world of medicine and how it works in the human body. For example, when you take medication to stop a headache, how does it know where to act and stop pain?” Reed said. “It wasn’t until I looked into the best programs at UT that I found the PharmD program and decided to apply for it.”

In addition to finding the perfect academic home at UToledo, Reed has achieved considerable success since becoming a Rocket in 2019. Reed was voted to the 2019 MAC All-Freshman Team, the same season Toledo won the MAC Tournament Championship. Reed has been a valuable starter, and is among the leaders on the team in hits, home runs and runs scored. Despite her achievements, Reed said she never stops trying to improve her mental and physical performance approach to the game.

“The game of softball is a challenge of mentality,” Reed said. “You can physically be the best player on the field, but if you don’t have a strong mental game to back it up, you can’t succeed.”

Reed’s dedication to softball began from those first days of youth competition and later into her high school and travel softball seasons. She was a four-year varsity letterwinner and three-time state champion for Meigs County High School where she set the school record for most hits in a single season. She also played travel ball for the Tennessee Fury. At the 2016 and 2017 TSSAA State Championship she set the TSSAA State Tournament record for most runs scored (12). Her efforts caught the eyes of the Tennessee Sports Writers Association, who named her to the All-State, All-District, All-Region and All-Academic teams.

Right by her side through high school and travel ball was her younger sister, Arika Reed. Arika then followed her sister to The University of Toledo, joining the Rockets in 2021. 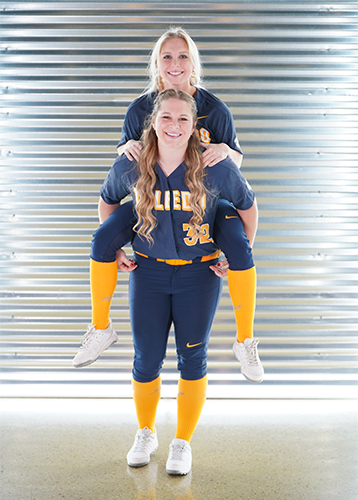 “The opportunity to play with my sister has been the driving force behind my success,” Reed said. “We are the perfect combination to competitively enhance one another to be the best forms of ourselves that we can be. She is the best supporter, and I couldn’t imagine being at this level without her by my side.”

Aubrey has been a good role model for Arika, both on the field and in the classroom. She was named to the 2021 Academic All-MAC Team, an honor that is granted to student-athletes for their ability to balance athletics and academics. A 53-game schedule along with practice, training and travel is a lot for any student-athlete on top of a full class load. Reed developed self-control and sought help from Dr. Julie Murphy, associate professor in the College of Pharmacy and Pharmaceutical Sciences, to help organize her workload and adjust to her missing classes and exams during the softball season.

“I honestly can’t remember the last semester I took under 18 credit hours, but I have to thank my pharmacy professors for being so understanding,” Reed said.

This year, particularly, Reed built a special relationship with Murphy. As the only student-athlete in her class, Reed knew she would need to reach out to her professor to discuss her unique challenges.

“Aubrey met with me the first week of classes to review her practice and game schedule,” Murphy said. “After looking at it, I’ll be honest, I was wondering if she would be able to be successful in this 8-credit-hour course and her other courses on top of being a student-athlete. Aubrey convinced me it can be done. She never complains about these competing commitments. She just gets the job done. In three words, Aubrey is dedicated, determined and disciplined.”

Reed will also have one more year in the Midnight Blue and Gold next season to exhaust her athletic eligibility and get one more years’ worth of memories.

“The best takeaway from playing with this team is realizing no matter the situation that occurs, you have the choice to build your own support system and at the end of the day that will dictate the level of success that you can achieve,” Reed said. “Positive people attract prosperity and expose the path towards success. When the day comes that I have to hang my cleats up for good, I will miss the relationships that I have built over the past 17 years and the successes that I owe to softball that will fade with time.”