Abigail Hernandez’s commitment to pursue a doctorate in physical therapy was, fittingly, a hands-on decision.

“I was surrounded by other students who also had a passion for helping others through exercise and movement,” Hernandez said. “I then learned how the body is capable of amazing things such as healing from surgery or getting stronger to prevent injury. I realized physical therapy is a way to see people at their worst and help them to become their best, which is why I pursued this career.”

The daughter of Filipino parents who moved to the United States when they were young,

Hernandez said that exploring and sharing her culture is important to her. As an undergraduate student she was part of the Filipino American Association and she was a founding member of the Physical Therapy Multicultural Leadership Council.

“Through my academic journey I wondered what can I do to bring change to the field of physical therapy,” Hernandez said. “I found that answer to be bringing Asian-American representation into field, as well as promoting other races, values and beliefs so that people can be treated by someone who looks like them or understands them. I also want to bring a better understanding of physical therapy to the public so people can get the help they need from our services.”

Hernandez also had diversity in mind when she applied for a performing arts physical therapy internship with a Chicago-based company, Athletico — despite having no prior performing arts or dance experience.

In her application, Hernandez spoke of her own diversity, a desire to help those with diverse self-expression maintain their health and her goal of dedicating herself to her profession’s strategic priorities for diversity, equity and inclusion.

And while she didn’t get that internship, Athletico was impressed with her application.

Hernandez was offered another opportunity with Athletico that provided experience in performing arts physical therapy with one of the company experts. She is in the final weeks of finishing her clinical rotation with the company.

“Self-confidence is something I have always struggled with and am continuing to grow in,” she said, “but I believe in taking opportunities as you see them, and I saw this as a door to something new and exciting.

“I sought out this opportunity as my last internship in order to promote diversity within the community, by not only working with a community of various nationalities, but also learning how to support performing artists such as dancers so that they can bring diversity to the community through their art and passion.”

Dr. David Kujawa, assistant dean for clinical affairs and clinical assistant professor in the UToledo College of Health and Human Services and physical therapist at The University of Toledo Medical Center, has been a mentor for Hernandez. 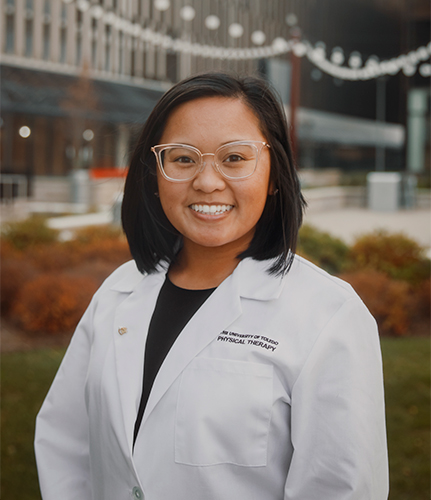 “Abigail has been a very motivated and self-directed learner in the Doctor of Physical Therapy program,” he said. “She independently and actively sought out learning opportunities outside of the classroom to enhance her knowledge of physical therapy for performing artists, which is her clinical area of interest after graduation.

“And as a founding member of the Physical Therapy Multicultural Leadership Council, a student organization committed to the promotion of diversity, equity and inclusion in the physical therapy profession, she took a very active role in the organization’s activities and worked very effectively as a team member and leader,” Kujawa said. “Abigail has a very bright future as a physical therapist, and I expect her to emerge as a leader in the profession.”

With her graduation behind her, Hernandez can look forward to celebrating the one-year anniversary of another on-campus milestone: her engagement.

Hernandez met fiancé Kevin Cruz just before her freshman year. Hernandez supported him as he pursued his doctorate in pharmacy degree at UToledo and he supported her while she was on her academic journey. Cruz proposed to her in June during what she thought was a marketing video for the University.

What she didn’t know was that this was an elaborate plan by Cruz, along with one of her sisters and a member of the UToledo Office of Marketing and Communications team, for him to propose.

“I was asked all kinds of questions: Why UToledo, the best of UToledo, why physical therapy. I talked about who I met at UToledo including my boyfriend at the time. And then the final question was Kevin asking me to marry him, so it became: I met my fiancé at UToledo.”

Cruz, along with her mother, father and sisters Kelsy and Ashley were at Friday’s commencement to cheer for Hernandez. She said she would not have had this moment without their help and guidance.

“Thank you for always standing in my corner, for always supporting me, encouraging me and reminding me that I am capable of all things,” she said. “Thank you for your patience and being the best practice patients while I perfected my skills. Thank you most of all for your love through the late nights, tears and little victories.

“Today I am a doctor of physical therapy and much of that is because of you.”