A faculty member and literature and pop music scholar in The University of Toledo College of Arts and Letters won an award for her first book and grants for her next scholarly monograph.

Dr. Kimberly Mack, an associate professor of English and a scholar of African American literature and American popular music, won the 2021 College English Association of Ohio’s Nancy Dasher Award this spring for her book, “Fictional Blues: Narrative Self-Invention from Bessie Smith to Jack White,” which was published in 2020 by the University of Massachusetts Press. 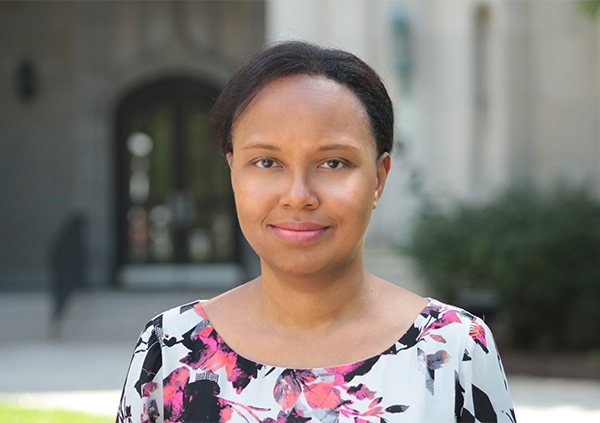 The book explores how blues artists — both Black and non-Black literary and real-life blues musicians — use their work to invent personas that resist racial, social, economic and gendered oppression.

The Association for Education in Journalism and Mass Communication (AEJMC) also recently awarded Mack a nearly $5,000 research grant for her next book, tentatively titled “The Untold History of American Rock Criticism,” which is under contract with Bloomsbury Academic.

Mack said the book is an alternative history of rock music writers and writing, documenting the impact Black, Indigenous and people of color and white women writers had on the development of rock criticism and journalism, rock music and American cultural history during the 1960s and 1970s.

Specifically, the grant will help Mack research a chapter in the book called “Rock Criticism in Black and Brown Publications.” Mack will use the funding to pay for travel to visit the Rock & Roll Hall of Fame Library and Archives in Cleveland and the Center for Black Music Research-Columbia College Chicago and the Harold Washington Library Center in Chicago.

The fourth chapter focuses on the Black and other non-white writers – such as Earl Calloway, a Black writer at The Chicago Defender who wrote about rock, and Phyl Garland, a long-time writer at Ebony Magazine and the first woman and first African American tenured at the Columbia University Graduate School of Journalism – who contributed their rock writing to Black and brown publications.

“This chapter considers the ways in which non-white, male writers at these outlets approached writing about rock for Black and people of color audiences,” Mack said. “Did they feel the burden to prove their legitimacy in the same ways that women and non-white writers at Creem or Rolling Stone might? And why are these writers erased from the rock criticism canon?”

In addition to the AEJMC grant, the Society for American Music awarded Mack its Charles Hamm Fellowship, which includes nearly $2,000 in financial support.

Mack also is writing a book about the second album, “Time’s Up,” by iconic Black rock group Living Colour for Bloomsbury’s 33 1/3 book series.