The University of Toledo was awarded the Reese Trophy as the top men’s athletic program in the Mid-American Conference at the MAC Honors Dinner in Cleveland Wednesday night. The Rockets earned the honor for the first time in the 65-year history of the prestigious award.

For the 2021-22 academic year, the Rocket men won a MAC championship title in basketball, and finished in second place in cross country, golf and tennis. Toledo’s football team tied for fourth overall in the standings, while the baseball team will finish in either third or fourth place depending on the outcome of this weekend’s games. Toledo has clinched the Reese Trophy regardless of baseball’s final regular-season finish in the standings. Final Reese Trophy standings will be released following the conclusion of the baseball season. 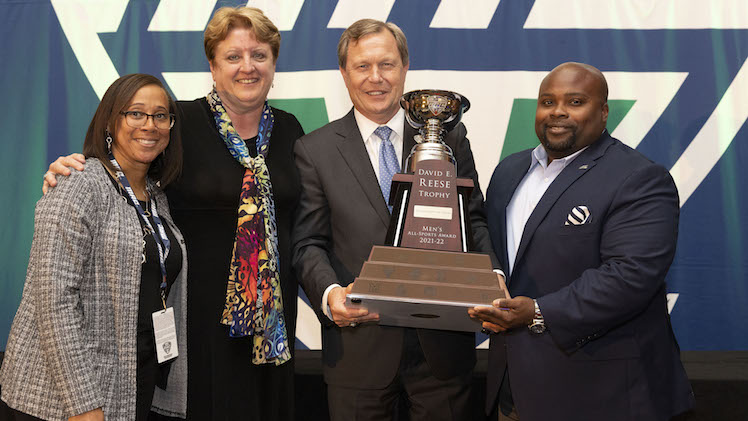 Toledo’s women finished fourth in the Jacoby Trophy standings. The Rocket women won MAC titles in cross country and basketball, took second place in tennis, and qualified for the MAC Tournament in soccer and volleyball. Toledo’s women won the award as the top women’s program in the MAC in 2012 and 2018.

“Congratulations to the student-athletes, coaches and staff in our men’s programs for being recognized as the best in the Mid-American Conference,” said Vice President and Director of Athletics Bryan Blair. “We would also like to congratulate our women’s teams on a very successful season. We are extremely proud of everything our teams have accomplished and congratulate them for their outstanding achievements.”

“We are very proud of our Rockets for receiving the Reese Trophy as the top men’s athletic program in the Mid-American Conference,” UToledo President Gregory Postel said. “Both our men’s and women’s teams had outstanding years in their respective sports. Our entire University community salutes their athletic achievements, as well as their continuing outstanding performance in the classroom.”

For the Reese and Jacoby trophies, points are awarded based on each school’s finish, with the overall total divided by the number of sports sponsored by each school.