Over spring break before travel restrictions and shelter-in-place mandates, seven honors students explored the Galapagos Islands as part of their class in the Jesup Scott Honors College.

Known for crystal-clear waters and wildlife found nowhere else in the world, the remote islands located 600 miles off the coast of Ecuador proved to be a place of awe and inspiration.

During time on campus and on the trip itself, students in the Galapagos Islands: Biology and Conservation class taught by Dr. Heidi Appel, dean of the Honors College and professor of environmental sciences, learned about the unique life of the islands, the evolutionary processes creating it, and current challenges to preserving it. The land-based trip — with boat rides between the islands — included the islands of Santa Cruz, Isabela, San Cristobal and Española.

Snorkeling submerged lava tunnels, swimming with sea lions, and learning about the danger of dumping plastic garbage in the ocean, the students’ journey carried even greater poignancy because of escalating worries about COVID-19.

Upon returning home, Appel and the students spent 14 days in self-isolation and reflected on their time in a place defined by resilience and change — the inspiration for Darwin’s theory of evolution. 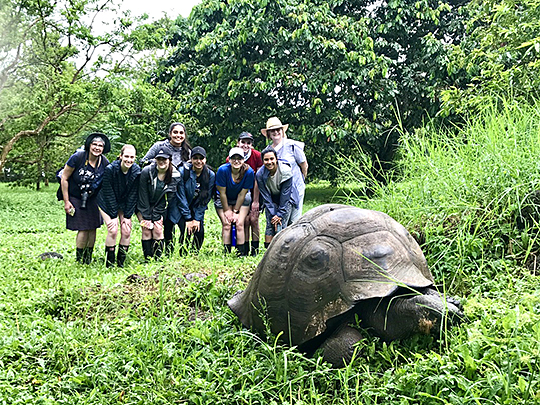 After arriving on a flight from Guayaquil, the class headed to the highlands of Santa Cruz Island to see the unique Scalesia forests and the El Chato Giant Tortoise Ranch.

“As with the animals, most of the plants on the islands are endemic and found nowhere else,” Appel said. “But it is the animals that capture our imagination.”

“The Galapagos tortoise is one of the most iconic species on Earth,” Gabrielle Cario, a bioengineering student, said. “To be able to stand within a few meters of such astonishing creatures was incredible.”

“I was so surprised to learn that this tortoise is over 100 years old,” Alexx Rayk, exercise physiology student, said. 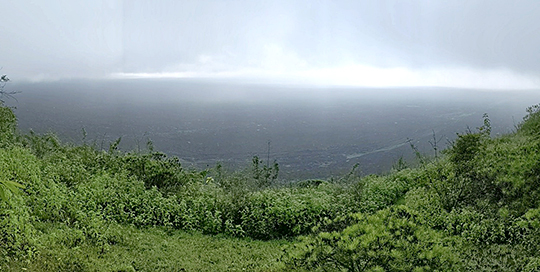 Situated on the Nazca continental plate near junctions with two others, the Galapagos Islands are all volcanic in origin. Students had the opportunity to hike up a volcano on Isabella Island.

“Despite the heavy showers that prevailed during our hike to the Sierra Negra Volcano, the experience was amazing,” Michelle Cherian, biology major, said. “While the volcano is now extinct, the previous eruptions have left behind enormous calderas and unique flora and fauna endemic to the Galapagos Islands.”

“The hike up and down to the viewpoint was one of the most memorable days on the trip, as we were all soaked through,” Cario said. “Seeing the newly formed lava rock and streams was incredible.” 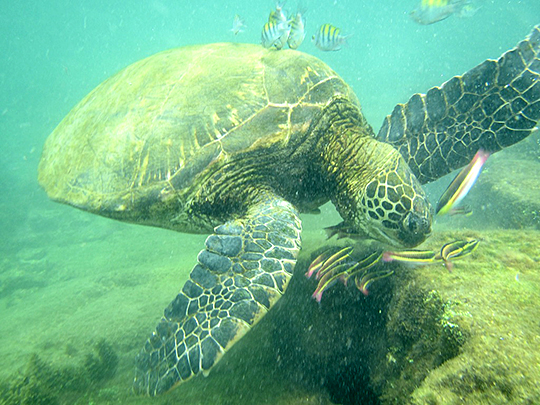 A sea turtle swam in the lava tunnels.

Isabella Island also is home to a large complex of lava tunnels formed millions of years ago when lava flows were cooled on the outside by water but stayed molten on the inside and emptied.

The top of the tunnels was a rocky desert habitat with Opuntia cactus the size of small trees and lots of nesting blue-footed boobies.

“It was also the best example of natural selection for the flightless booby born outside of the typical mating season,” said Dilpreet Kaely, bioengineering major, who had taken her first swim lessons in preparation for snorkeling on the trip.

Taylor Boyd, a biology major, enjoyed looking down from the top of the tunnels.

“The water was so clear we could see everything underneath the surface from the boat,” Boyd said. 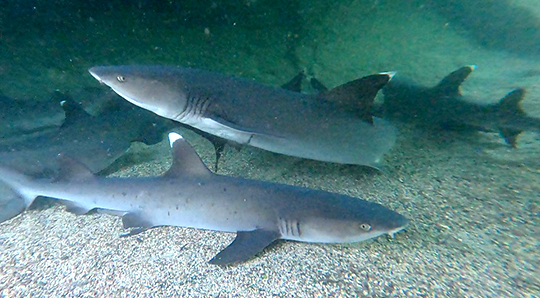 Students jumped into the submerged lava tunnels to snorkel.

“Within the maze of underwater lava tunnels, we weaved in and out of rocky coves and shallow corals, sighting schools of fish, sea horses and sea turtles along the way,” Cherian said. “The green sea turtles were especially impressive due to their size and mellow activity.”

“I never realized how large sea turtles were until we were swimming right next to them,” said Tessa Keran, a chemical engineering student.

“I have always wanted to swim with marine wildlife, and to be able to swim into a cave with a bunch of whitetip sharks was a highlight in my life,” Ashima Thusu, bioengineering major, said.

“We encountered turtles, sea horses, sting rays, several different types of fish, and a cave full of sharks,” Cario said. “It was an amazing snorkeling trip.” 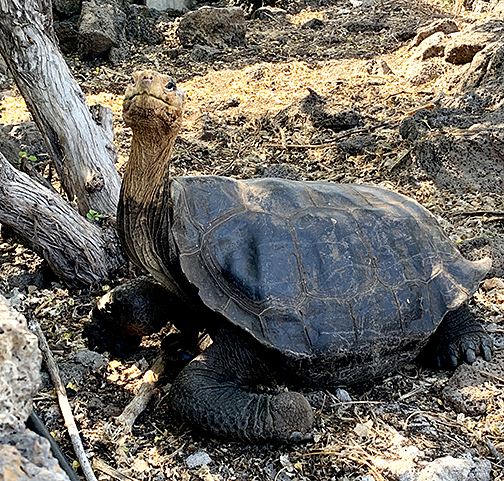 The honors class saw this saddleback tortoise at the Darwin Research Center.

The class returned to Santa Cruz Island to visit the center of conservation efforts in the islands.

“It was really interesting visiting the Charles Darwin Research Center and learning about their conservation initiatives,” Keran said. “Saddleback giant tortoises are critically endangered due to the historic harvesting for food and oil by seafarers and later introduction of invasive species such as dogs, rats and cattle.”

But good news came recently in a report from the Darwin Research Center that they had recently located on Isabela Island some tortoises with DNA like those from Pinta and Floreana islands, perhaps a last-minute drop-off from those same seafarers as they left the island archipelago.

New challenges are more sobering though. Twenty Galapagos bird species, including 12 species of Darwin’s finches, are under threat from a parasitic fly accidentally introduced to Galapagos that feeds on the blood of hatchlings causing all of the chicks to die.

“We have to remember that the amazing animals we saw in the Galapagos may not always be there if things continue the way they are,“ Rayk said. 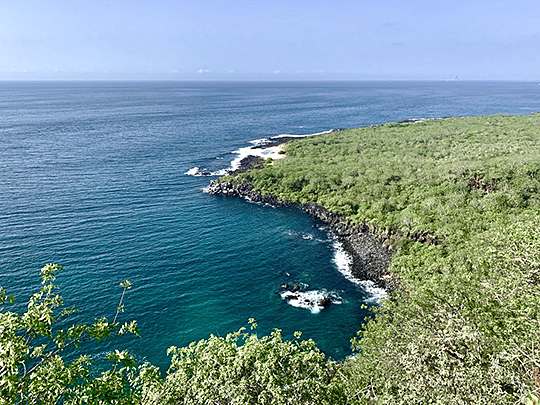 The students arrived on San Cristobal Island, their home base for the last three days of the trip.

Except for the rainy hike up the Sierra Negro volcano on Isabela, all of the days were hot.

After lunch, they visited the Tijeratas Interpretive Center featuring the geological, biological and cultural history of the islands. It included a large topographic map of the islands and the surrounding ocean, giving a full sense of their volcanic origins. 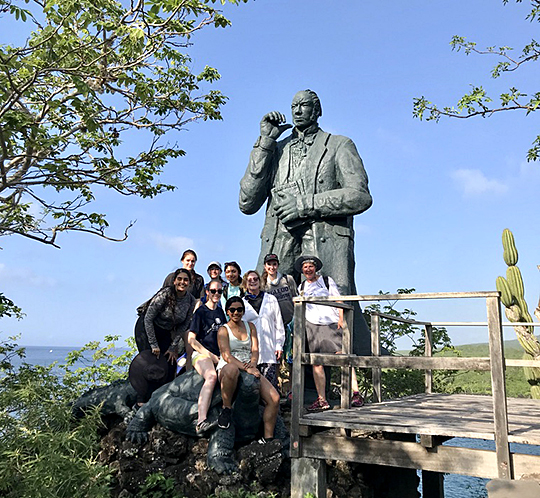 The class posed for a photo with the Charles Darwin statue in San Cristobal.

“Tijeretas Hill, or Frigate Bird Hill, was my favorite view from the Galapagos. It is also historically important because it was where Darwin first came on San Cristobal,” Kaely said.

Something special happened for Thusu while overlooking Botany Bay.

“This view will be forever ingrained in my head,” Thusu said. “The uphill trek was steep, but once we reached the top, it was worth it. At that moment, I received an email saying that I had been accepted to medical school, an email I had been waiting for two months. It was truly one of the most joyous experiences of my life.” 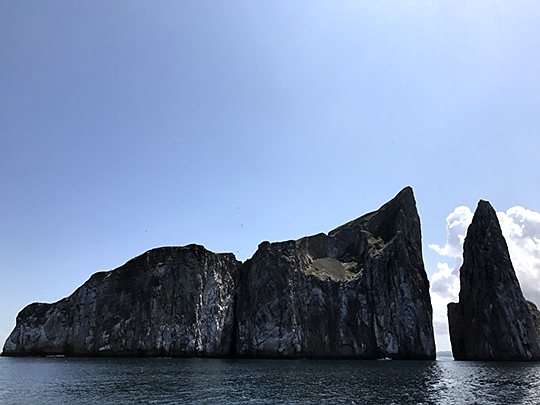 Kicker Rock, or Leon Dormido, is an hour and a half boat ride from San Cristobal and home to a very different kind of marine habitat.

Rising almost 500 feet above the ocean, this remnant of a volcano cone was home to nesting frigate birds, Nazca and blue-footed boobies. Its stronger currents and upwelling attracted different marine species.

“Despite not being an adequate swimmer, the snorkeling experience at Kicker Rock was breathtaking,” Cherian said. “From swimming with a manta ray to spotting several sea lions, it was most definitely an unforgettable day for me.”

“Right off the boat, we saw an enormous pool of fish swimming in silver streaks while besting a mighty sea lion from becoming its prey,” Thusu said. 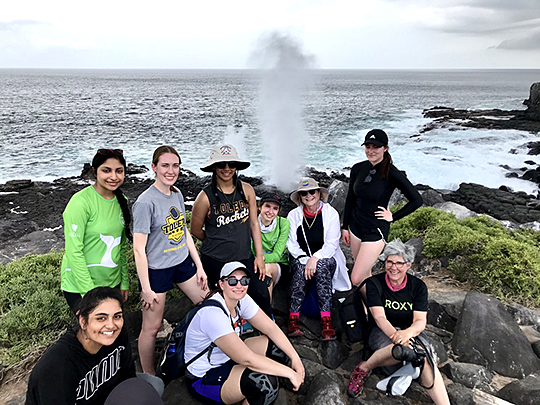 The class visited a geyser on Española Island.

“One of my favorite days was the day trip to Española Island,” Cario said. “The nature here was surreal, as it was not disturbed by human interaction except on the small foot trails. The natural geyser was also incredible. Birds, iguanas and lizards were everywhere.”

“We found a huge flock of Nazca boobies, and it was really cool to see them all together, and we could even see some fluffy babies,” Boyd said. 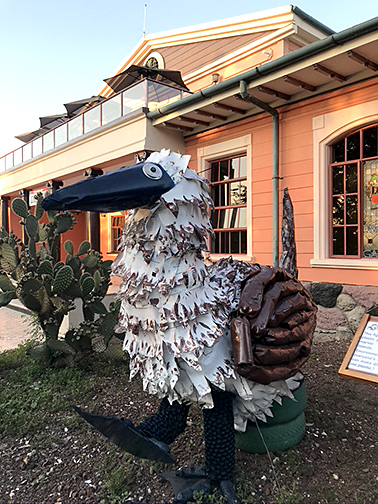 This Nazca booby stands outside the Galapagos Science Center; the sculpture is made from recyclable material to raise awareness about plastic pollution.

Muñoz gave a lecture on plastic pollution in the Galapagos Islands, a problem that is particularly bad because of their position at the intersection of three major ocean currents. Plastic has been recorded inside of 18 marine species.

Through research by an international consortium of scientists, the major sources of plastic pollution have been identified: the coasts of Ecuador and Peru, and discharge from Asian fishing vessels in international fishing zones adjacent to the islands.

Outside the Galapagos Science Center stands a sculpture of a Nazca booby made from recyclable material to raise awareness about this plastic pollution.

“The conservation efforts established within the Galapagos Islands have given me an entirely new insight into the issue of pollution as a whole,” Cherian said.

Over a farewell dinner on the waterfront in San Cristobal, students reminisced about the trip with David Cevallos, their Ecuadorian trip leader.

They realized that heading home during the worsening spread of COVID-19 was bittersweet.

“The opportunity to go on a trip like the Galapagos Islands was a once-in-a-lifetime experience,” Cherian said. “Despite the prevailing sense of anxiety and chaos that developed during the influx of COVID-19, I was truly able to enjoy the endemic flora and fauna, as well as the unique animals that have evolved on the islands.”