A new study from The University of Toledo College of Medicine and Life Sciences has shown gut bacteria can reduce the effectiveness of certain blood pressure drugs.

The research, published this month in the journal Hypertension, offers the first clues to what has been an elusive mystery — why do some people not respond well to medication? 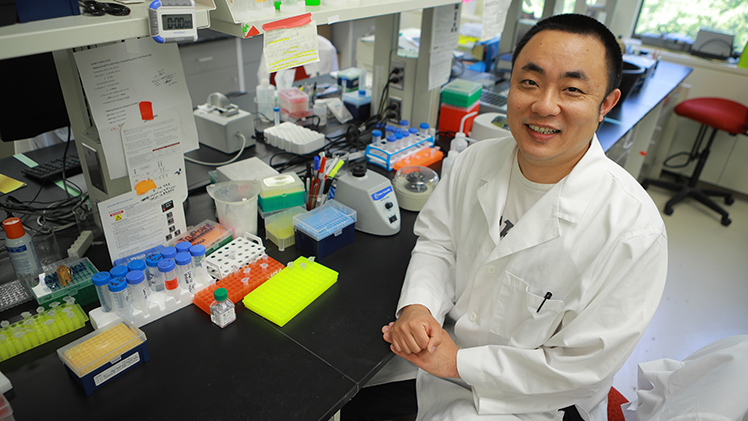 Dr. Tao Yang, an assistant professor in the Department of Physiology and Pharmacology, is the study’s first and lead author.

“High blood pressure is often called a silent killer because it doesn’t usually cause symptoms. However, there is a big population of individuals who know they have hypertension but still cannot get it under control, even though they’re taking blood pressure drugs,” said Dr. Tao Yang, an assistant professor in the Department of Physiology and Pharmacology and the study’s first and lead author. “Addressing this is of huge clinical importance.”

Hypertension, or high blood pressure, is a major risk factor for heart disease and stroke, two of the leading causes of death in America. It’s also one of the most common chronic conditions in the United States, with nearly half of U.S. adults considered hypertensive under current guidelines.

Among those with high blood pressure, an estimated 20% have what’s known as resistant hypertension, meaning their blood pressure remains high despite aggressive treatment.

“The only thing doctors can really do in these patients is adding or switching medications and increasing the dose with the hope they can find something that works,” Yang said. “Until now, we haven’t had any clear indication what the mechanism is for resistant hypertension. Our research could provide a first step toward identifying new ways to effectively overcome treatment-resistant hypertension.”

In recent years researchers have more intently examined the link between an individual’s blood pressure readings and the unique collection of bacteria that lives in their gut.

That work — significant portions of which has been done at UToledo — has helped to unravel potential causes of hypertension that extend beyond diet and exercise. However, Yang’s research is the first to examine the impact of gut bacteria on blood pressure medication itself.

Dr. Bina Joe, Distinguished University Professor and chair of the UToledo Department of Physiology and Pharmacology, and the study’s senior author, said the research is a significant extension of UToledo’s work to better understand the causes of hypertension and find new ways to treat it.

“Yang pioneered this important, highly translational idea during his training as a postdoctoral fellow in my laboratory,” she said. “This is now a major research theme in his own laboratory at The University of Toledo.”

In the study, UToledo scientists compared the effectiveness of the antihypertensive drug quinapril in rats with normal gut bacteria against those whose gut microbiota had been depleted by high doses of antibiotics.

Researchers found a clear difference between the two, with animals that were given antibiotics first responding much better to quinapril.

Analysis of the gut bacteria composition in the animals identified the bacteria Coprococcus as the culprit. Laboratory experiments proved that Coprococcus comes, a dominant bacteria species in this genus, can break down quinapril and ramipril, resulting in the compromised blood pressure-lowering effects.

While the UToledo study was limited to animal models and lab experiments, researchers identified at least one intriguing case study that seems to bolster the argument that this finding could be applicable to humans.

That 2015 report, published in the International Journal of Cardiology, described a woman with a long history of treatment-resistant hypertension whose blood pressure was controlled without any antihypertensive medication for the two weeks she was taking antibiotics for a post-surgical infection. Her blood pressure was able to be controlled with only one medication for six months after stopping antibiotics before again becoming treatment-resistant.

“This is just one report and more research is needed. However, this suggests that gut bacteria can play a very real and very important role in regulating the efficacy of blood pressure medication,” Yang said.

The research group plans to continue its work by studying the interaction between additional blood pressure medications and other common types of gut bacteria.

Though long-term use of antibiotics isn’t a realistic strategy for addressing treatment-resistant hypertension, Yang said it should be possible for someone to alter their microbiota through probiotics, prebiotics and changes in diet.

“The ultimate goal of my research is to identify ways we can specifically target the bacteria in an individual’s gut to improve drug efficacy,” he said. “This has the potential to benefit a lot of people.”

Dr. Young Oh, a program officer with the National Heart, Lung, and Blood Institute, agrees that this study represents an important piece of the puzzle in understanding resistant hypertension. The study was supported in part by the NHLBI, part of the National Institutes of Health.

“The gut microbiome has been understudied as it relates to hypertension,” said Oh, who was not a member of the study team. “While this study fills an important knowledge gap, more studies are needed, particularly in humans, to confirm the findings.”

The research was also supported in part by a grant from the American Heart Association.