This time last year, Makei Daniels, 11, was just sitting at home with not much going on.

Now, he’s smiling and playing and hanging out with friends and counselors as one of nearly two dozen summer campers at the National Youth Sports Program at The University of Toledo. 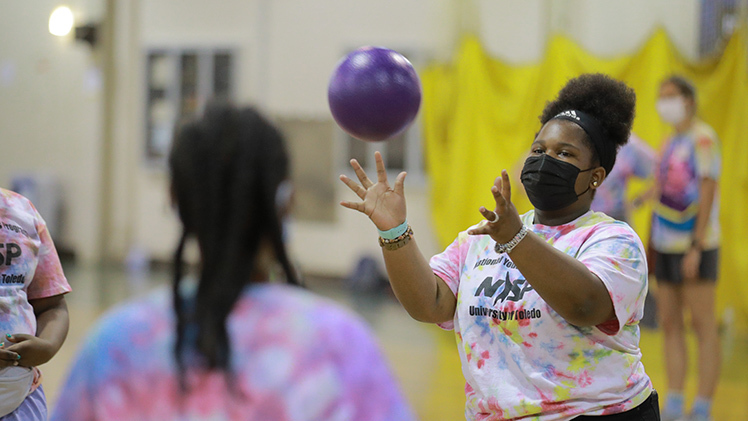 Twelve-year-old Qaylinn Hopings, from Toledo, plays a game called Silent Ball with other participants at The University of Toledo’s National Youth Sports Program.

A blend of recreation and educational programming for income-eligible children, ages 9 through 12, to help them build social skills, confidence and healthy lifestyles, the NYSP returned for a three-week summer camp on June 2 that runs 9 a.m. to 3 p.m. weekdays through Tuesday, June 22. Online applications are still being accepted.

The camp has been hosted on UToledo’s campus every year since 1969 — with the exception 2020 when the camp was canceled because of COVID-19.

“It’s very fun, I really like it,” Makei said, taking a break from playing “silent ball,” a game in which a circle of campers tosses a ball randomly around the group and without notice. “We’ve played volleyball, done basketball drills and made tie-dye shirts and I got a really good lunch.”

Most important to him, though, was the opportunity to be out of the house and engaged with his peers.

“I get to meet and see new people and some of them will probably come back to this camp and we can play again.”

Maureen Knowles, the medical coordinator for the NYSP, said Makei’s enthusiasm for the camp is why it’s necessary.

“This is an important camp that The University of Toledo runs for kids, particularly since they’ve been affected by COVID in the past year and a half,” she said. “Now they can get together and do fun things under safe conditions – we all have masks on – but it’s fun to be with other kids and kids are allowed to be kids, and that’s what’s so important about our camp.”

UToledo Professor Dr. Ruthie Kucharewski, who is in charge of the camp, said NYSP is “a hidden gem in this city and at the University.”

“UToledo recreation therapy students, recreation graduate interns, football players and returning NYSP staff serve as role models and facilitate activities and are a major why children are having so much fun,” she said. “We have generations that have come to this program. It’s word of mouth, they send their children and their grandchildren and their great-grandchildren,” she said. “It’s just a very well-known program nationally as well.”

Makei’s father, for example, attended NYSP. And 12-year-old Morgan Carnes, who started the camp at the age of 9, joined the camp after her sister. Her grandmother was also an NYSP camper.

“This is great for making friends, socializing and getting active,” she said. “If it wasn’t for this, I’d probably stay inside all summer.”

There are a lot of activities including, basketball, football and volleyball, which she just learned to play.

“I never thought volleyball would be something I would want to try but now I actually like it,” Morgan said. “It’s just fun.”

For more information or to register, visit the UToledo NYSP website.