If the familiar hourly bell chimes from The University of Toledo’s bell tower haven’t sounded, well, quite as familiar, your ears are on to something. 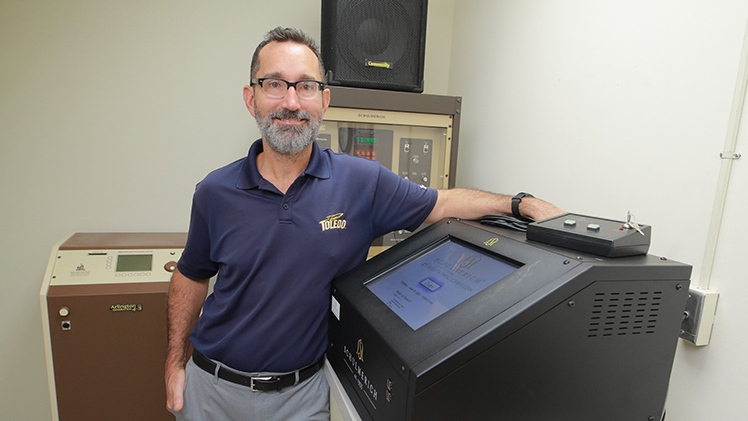 Dr. Jason Stumbo, associate professor of music and director of bands, who is in charge of the carillon, poses with the newly purchased Schulmerich g5 unit. In the background are the University’s two older carillon systems that provided the bell chimes for the bell tower.

It wasn’t much later that Dr. Jason Stumbo, associate professor of music and director of bands, who is in charge of the carillon, received a text message from a friend who lives close to campus and wanted to know if there was something different about the bells.

He explained to her that the University has a new carillon. But she still wondered if there was more to it. The bell chimes were softer.

For now, the bell chimes are simple: “It’s like the ‘Westminster sound,’ the classic sound,” he said. But UToledo’s new carillon has the potential to provide the campus community and beyond with much more than classic.

It has 7,800 preprogrammed melodies in four types of “bell voices” (True Cast Bells, Flemish Bells, English Bells and Harp Bells) that are digital samples of individual bells. It also can play recorded melodies, meaning, for example, it could ring out a recording of The University of Toledo fight song Stumbo made as a bell melody.

“It will sound very true to the song if played by 32 bells in a harmonized, organized manner,” Stumbo said.

Purchased for less than $15,000, the Schulmerich g5 is housed with its two predecessors in the Carillon Room, a small, out-of-the-way space on the sixth floor of University Hall.

Essentially a black box with a large LCD touchscreen, the Schulmerich g5 is noticeably smaller than the University’s other carillons. The old technology stands tall — one approaching the same height as Stumbo, the other several inches higher than his waist – while the Schulmerich g5 sits on a table.

The new carillon is easy and intuitive enough to operate that there is no operating manual, though a user’s manual can be accessed through the device.

And it can be operated entirely online — an important technology missing from its decades-old predecessors — which allows Stumbo to access it from anywhere, anytime, including, for example, resetting it following a power outage.

For now, Stumbo is taking a slow and steady approach to putting the Schulmerich g5 through its paces, as he becomes more familiar with its abilities. “I still have a lot to do,” he said.

But he’s open to suggestions and even to requests. For example, scheduling the carillon to play holiday songs for each holiday, or to play classical melodies from composers such as Bach —even something like the “Star Wars Main Theme” on May the Fourth.

“My thought is that the community wants to hear something similar to what they’ve heard for years,” Stumbo said, “but they wouldn’t mind the occasional twist. I think it could be fun to have this thing play music that is expected and unexpected.”