Ishfaq Rahman and Kimberly Panozzo bonded soon after they met over their shared appreciation for Stephen King, particularly his 1978 novel “The Stand,” which details an extraordinarily deadly influenza pandemic.

Two years later, they found themselves consumed with the emerging story of a very real virus that was poised to disrupt the lives of billions of people worldwide. 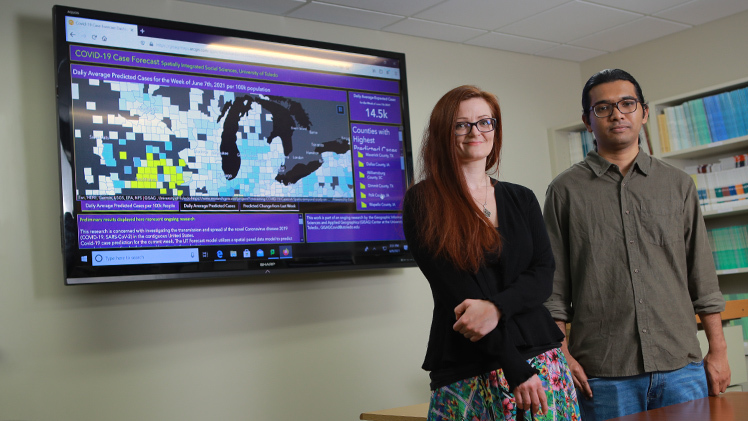 Ph.D. students Kim Panozzo and Ishfaq Rahman stand next to the map they developed to predict where COVID cases are likely to rise and fall each week.

Rahman and Panozzo are doctoral students in the Spatially Integrated Social Science Program at The University of Toledo, a program that uses the intersection of geographic analysis and a range of social sciences, including public health, to better explain trends in our world.

In January 2020 as the COVID-19 outbreak widened, the two researchers were glued to their computers trying to use that expertise to determine how the virus might spread across the globe.

“There was this fear the virus might go international,” Rahman said. “We started looking at international airports, mapping flight paths and average traffic flow to see if there is a new case where it might potentially be. We wondered, can we track the virus just by tracking people’s motion and flow?”

Once it became clear the novel coronavirus had made its way to the United States, they took their fledgling work to Dr. Kevin Czajkowski, professor in the Department of Geography and Planning and SISS program coordinator.

He encouraged them to dig in deeper.

And now, just over a year later, their research group — which grew to include colleagues from the Department of Geography and Planning and the School of Population Health — has unveiled a new online map that forecasts the virus’s ebb and flow for more than 2,000 U.S. counties.

Each Monday the team uploads a new forecast of how many cases those counties will see over the next seven days, breaking it down both in raw numbers and in the case rate per 100,000 people.

What sets the UToledo team’s model apart from other COVID-19 predictive models is its use of spatial analysis in conjunction with epidemiological data.

Instead of things like test positivity viral reproduction rates, Rahman and Panozzo looked at aggregated county-level mobility data from Google and Apple, historical temperature averages and government restrictions such as school closures and travel restrictions.

The model also considers the number of cases in each county the prior week.

“Proximity, location, movement — that’s the fundamental part of how viruses spread,” Panozzo said. “By modeling that you can predict where cases will rise or fall. It’s a fundamentally geographic phenomenon.”

While the team’s model was initially conceived to get around serious gaps in reliable information about the virus in the pandemic’s early months, she said their method has held up well against other, more traditional methods of predicting how the coronavirus will spread.

Each week, researchers compare their previous forecast to the actual reported number of new COVID-19 cases in each county. For the last two months, the model’s accuracy has fluctuated between 86% and 90%, putting it on par with some of the country’s most accurate forecasting models.

“Our model is more centered around people’s behavior. That’s the simplicity, the beauty and the difference of it,” Panozzo said. “It’s a perfect example of how what we do with geography, social and spatial sciences can be applied in the real world and how relevant it is.”

Czajkowski credited the tenacity of his students, who have spent months researching, developing methodology and checking their projections against real-world results.

“Ishfaq and Kim are probably the best students I’ve ever seen who can pull data off websites and read between the lines, pulling things out that aren’t obvious,” Czajkowski said. “Kim and Ishfaq were using publicly available information and doing new analysis with it.”

Though the number of new COVID-19 cases in the U.S. has fallen significantly in recent weeks with the increase in vaccination rates, the researchers say accurate forecasting remains as important now as ever.

“Cases are going down, but it is not going down at the same rate everywhere, just as it did not go up at the same rate everywhere. The forecast map can identify where a new hot spot might potentially emerge,” said Rahman, who is now focusing his dissertation on the research. “Looking at it from a geographical perspective is helpful for policymaking and preparedness, as well as for personal risk assessment.”

A paper outlining the group’s initial findings on the relationship between government policy, mobility and viral spread is awaiting peer review, and another paper detailing the predictive model’s methodology is in the works.

The group also hopes to use their model to investigate the true infection rate in the United States over the course of the pandemic, as well as a post-pandemic analysis that attempts to quantify how much adherence to stay-at-home orders and other government restrictions stemmed the spread of the virus.