After traveling millions of miles, well past the moon’s orbit, the world’s most powerful telescope is giving humanity its first sharp images of deep space — details of the earliest galaxies that are home to the first generations of stars to have ever formed more than 13 billion years ago — and astronomers at The University of Toledo are marveling at the newly opened window into the far reaches of the universe.

“It is a new world,” said Dr. Rupali Chandar, professor of astronomy, who is overwhelmed by the details revealed in the first image of a group of interacting galaxies known as Stephan’s Quintet from NASA’s new James Webb Space Telescope and how they compare with images taken with the Hubble Space Telescope. 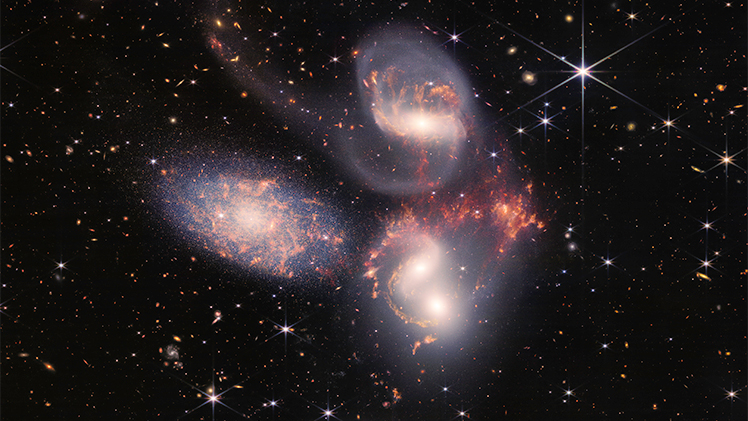 Stephan’s Quintet, a visual grouping of five galaxies, is one of the four images from the James Webb Space Telescope that NASA released on Tuesday. The world’s most powerful telescope is providing the first sharp images of deep space and UToledo astronomers are marveling at the newly opened window into the far reaches of the universe.

“It gives me goosebumps to see these young galaxies interacting at a level of detail we have never seen before. Webb really is about to change what we know about and how we see the universe.”

UToledo’s astronomers will be among the first to discover some of the universe’s secrets because they are leading some of the first research projects on Webb. The University ranks No. 6 among all institutions worldwide in successful proposals for the first cycle of scheduled observing time. Projects led by UToledo astronomers will use nearly 20% of the hours reserved for star research.

Chandar, who studies star formation and looks for ways galaxies merge, will be receiving her first data from Webb in a few weeks. She is devoting her precious six hours on NASA’s new flagship space telescope to zero in on what’s known as the Overlap region located about 70 million light-years away to produce jaw-dropping images of massive young star clusters forming as two galaxies collide.

“We have been waiting and getting ready by setting the stage, updating our software and trying mock fitting runs,” Chandar said. “We’re not looking at our own data yet — it’s coming — but right now we’re comparing optical Hubble images to Webb’s early release infrared images to get a side-by-side look.”

“If you’re a student in Ohio and you want to get involved in the Webb Space Telescope, UToledo is the place to be,” said Dr. J.D. Smith, professor of astronomy and director of the Ritter Astrophysical Research Center. “We are incredibly fortunate to have a big role to play in the first cycle of observations. We have the only five approved observing programs in the entire state. I am convinced that this is the best time to be an astronomer in human history.”

With a research focus on the physical conditions of interstellar material as a tool for understanding galaxy evolution, Smith studies hydrocarbons and will use Webb’s precision to dissect the elusive smoke-like material floating between stars and planets in M101, the Pinwheel Galaxy.

“Ubiquitous in galaxies in the universe, they exhibit a lot of unusual properties and behaviors,” Smith said. “It’s an unexplored frontier.” 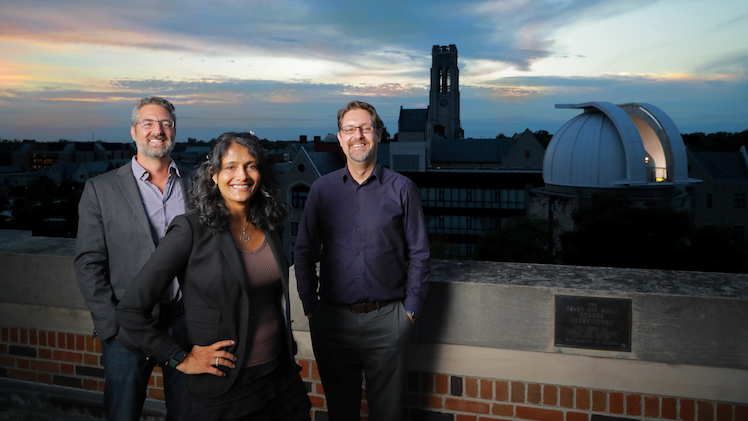 Building on his previous discovery of ultra-cool brown dwarf stars, called Y dwarfs, that have such low mass and temperature you couldn’t see them with your eye, Dr. Michael Cushing, professor of astronomy and director of UToledo Ritter Planetarium, will research their effective temperatures and mass function.

And on his quest to unravel the mysteries of star and planet formation within our own Milky Way galaxy, Dr. Tom Megeath, professor of astronomy, will use Webb to focus on star nurseries for an unparalleled view of how individual stars are born.

“It was awe-inspiring to finally see JWST images of the Carina Nebula, a nearby stellar nursery,” Megeath said. “In the next few months, we are going to zoom in on individual protostars, which are baby stars still growing in size. From these data we will better understand how gigantic interstellar clouds of gas become stars. This program, led by UToledo, is one of the largest JWST studies on star birth in our galaxy.”

Data from the five UToledo-led programs will be coming in over the next year, but UToledo astronomers are involved in about 20 early-release science and Cycle 1 projects.

For Chandar, Webb is the missing puzzle piece for ongoing efforts to solve many mysteries of the universe.

“Some data from one of my projects on 38 nearby spiral galaxies called the PHANGS Survey has already been taken using Hubble, the Atacama Large Millimeter/submillimeter Array known as ALMA and the Multi Unit Spectroscopic Explorer called MUSE,” Chandar said. “It’s a large international collaboration of scientists that resulted in this incredibly rich, radical data set bringing together all of these pieces with exquisitely high-resolution imaging. But we have only scratched the surface so far. With its power in the infrared, Webb will give us the information we’ve been missing.”

And the wait will be worth it.

“My family watched the launch of Webb on Christmas morning, and it was more amazing than we had ever imagined. Now it’s about seven months later and we’re getting ready to receive our first data,” Chandar said. “We’re all set up and waiting for the data to come down. The anticipation is indescribable. Breathtaking.”