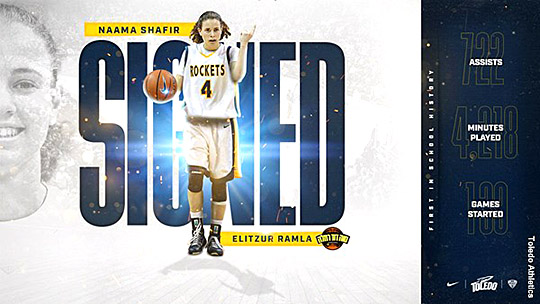 In addition, Kaayla McIntyre, Janelle Reed-Lewis, Dortch and Harris currently play for the Toledo Threat, which is part of the women’s professional basketball organization.

Shafir, who retired in 2019 after getting married and giving birth to a daughter, is playing for Elitzur Ramla for the second time. During the 2017-18 season, she averaged 7.5 points, 3.1 rebounds and 4.7 assists in 30 games. Shafir shot 39.8% from the field, including 39.5% from three-point range, and 89.8% from the free-throw line, helping the team make it to the finals.

Most recently, Shafir played for Maccabi Ramat Hen in the D1 Israel National League during the 2018-19 campaign. She tallied 9.6 points, 4.5 boards, 4.7 helpers and 1.1 thefts in 24 contests. Shafir converted 49.3% from the floor, including 42.6% from beyond the arc, and 86.8% from the charity stripe, guiding the squad to the cup final and the league semifinals.

“I’m happy to hear Naama is resuming her professional career after taking a year off for the birth of her baby,” Cullop said. “She was a joy to coach, and I’m sure her teammates are thrilled for her return.”

As a freshman, Shafir averaged 11.7 points and 4.5 assists, earning honorable mention All-Mid-American Conference recognition. A year later, she earned second-team all-league honors, contributing 14.3 points and 6.7 helpers, leading Toledo to the MAC Championship Game for the first time since 2001. As a junior, Shafir tallied 15.3 points and 5.1 assists, garnering first-team All-MAC accolades. The Rockets won the MAC regular-season championship that year and went on to capture the Postseason WNIT. She was named tourney MVP, scoring a career-high 40 points against USC in the championship game before a record crowd in Savage Arena.

Shafir played in only four games in 2011-12 due to a knee injury, but the Hoshaya, Israel, native came back in 2012-13 to propel the Midnight Blue and Gold to a 29-4 overall record, 15-1 in the league. Shafir once again collected first-team all-league honors, registering 12.8 points and 4.6 assists. She was runner-up for MAC Player of the Year and a regional finalist for the Women’s Basketball Coaches Association Coaches All-America Team.