Professional basketball television analyst Stan Van Gundy will be the keynote speaker for the men’s basketball team’s annual Rocket Roundball Social Wednesday, Oct. 16, from 6 to 8 p.m. on the main floor in Savage Arena.

Dr. Sharon L. Gaber, president of The University of Toledo, is hosting the event. All proceeds will go to the Toledo Men’s Basketball Progress Fund. 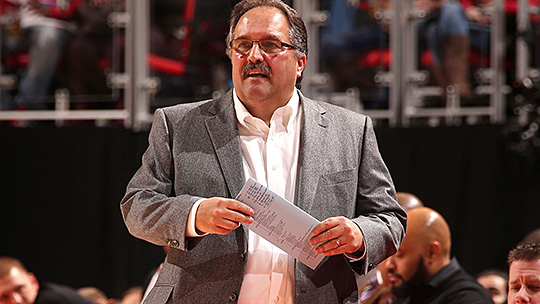 The Rocket Roundball Social, which is an event that has grown into a Toledo basketball tradition, offers individuals the opportunity to meet President Gaber, Head Coach Tod Kowalczyk, and his staff and players while enjoying food from some of Toledo’s finest restaurants.

Van Gundy graduated in 1981 from the State University of New York at Brockport, where he played for his father, Bill Van Gundy. Stan’s brother, Jeff Van Gundy, is also a former NBA head coach and spoke at the Rocket Roundball Social in 2017. The impressive list of speakers at previous socials also includes John Beilein, Jay Bilas, Dan Dakich, Fran Fraschilla and Seth Greenberg.

“We’re extremely excited to have Stan Van Gundy serve as the guest speaker at our Rocket Roundball Social,” Kowalczyk said. “I have great respect for Stan and all he has accomplished in our profession. One of my closest friends is his father, Bill, who has been very instrumental in my career. As a result of that relationship, I have gotten to know Stan and Jeff, and I think the world of their family. I think our fans will enjoy hearing him speak and provide insight on the world of basketball.”

Tables for the event are sold-out, but a limited number of individual tickets are available for $100.

Payments can be made via cash, credit card or check. Checks should be made payable to The University of Toledo Foundation.

Reserve tickets by Friday, Oct. 11, by email to toledombb@gmail.com or by calling Basketball Director of Operations Jordan Lauf at 419.530.4796.