Someone once described Shanna Merola’s artwork as “nightmare fuel.”

In 2020, an exhibit dedicated to Merola’s artwork is apropos, according to curator Brian Carpenter, assistant professor of art and director of the Center for Visual Arts Gallery. 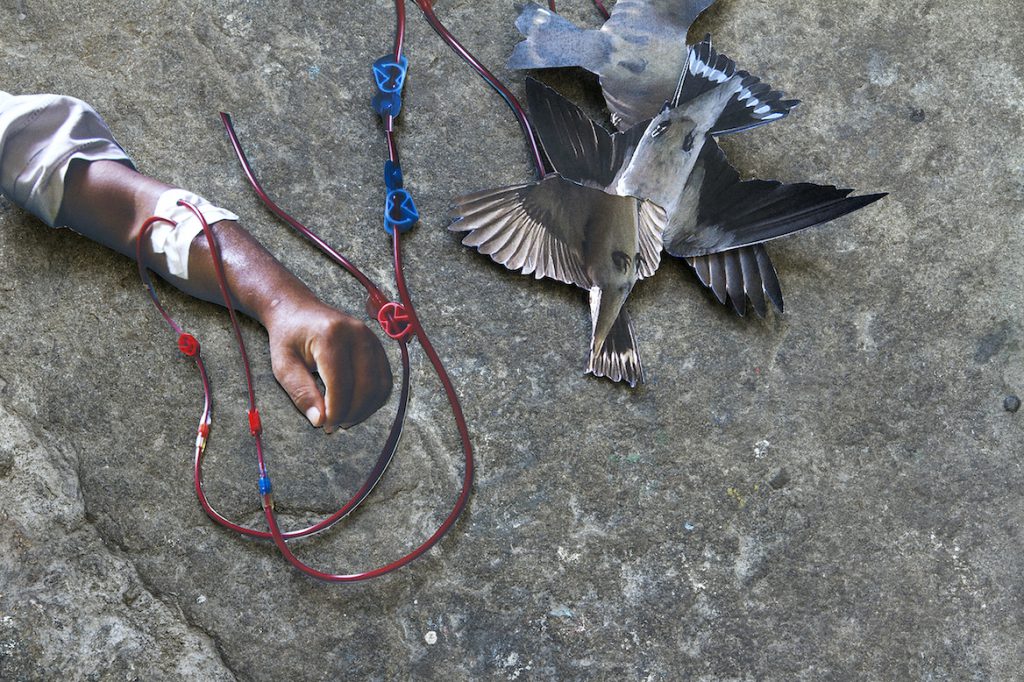 Named for a toxic compound produced in the United States for more than 50 years before it was banned in 1979, “Polychlorinated Biphenyl” is an example of Detroit-based visual artist Shanna Merola’s art-as-activism work.

The exhibit, which opened Oct. 8, is an assemblage of uniquely piercing visages that serve as a collective call to action, set in what Merola, a Detroit-based visual artist, photojournalist and legal worker, described as a “somewhat distant future where any semblance of the EPA collapses and big oil wins. Regulations all but disappear and unfettered free-market capitalism becomes the rule of law. In the aftermath of full-scale ecological disaster, the fractured earth and its inhabitants are learning to adapt, mutate and survive.”

Carpenter, who has worked with Merola for a decade, said, “Art can be a vehicle for activism. What’s great about Shanna’s work is that it hits a space right now with what people are thinking about.

“It’s important to think about what is our outcome, why are we here, are these benefits to our comfort worth it? Should we be questioning fracking and other capitalistic endeavors that really affect people and their health?”

Carpenter will also host a Facebook Live Q&A with Merona from 10 to 11:30 a.m. Wednesday, Oct. 14 for Momentum, the three-day arts and music festival in downtown.

Merola said the process for each piece “begins with a visual databank” of archived source images that are “printed, hand-cut, assembled into the landscape and re-photographed.”

Merola has been awarded studio residencies and fellowships through the MacDowell Colony, the Studios at MASS MoCA, Kala Institute of Art, the Society for Photographic Education, the Puffin Foundation and the Virginia Museum of Fine Art, and her work has been exhibited nationally and internationally.

In addition to her exhibit, Carpenter said he plans to bring Merola in as a guest speaker for his Concepts in Art, Studio, and Theory course.

“Shanna works in spaces, legally and politically, and talks about advocacy and activism,” he said. “I felt like that was very appropriate this year.”