A new publication created by medical students helps bridge the gap between science and art.

Named for a measure of visible light emanating from a source, The Lumen is an art and literary magazine published bi-annually by and for The University of Toledo College of Medicine and Life Sciences by students in the Medical Humanities Club. 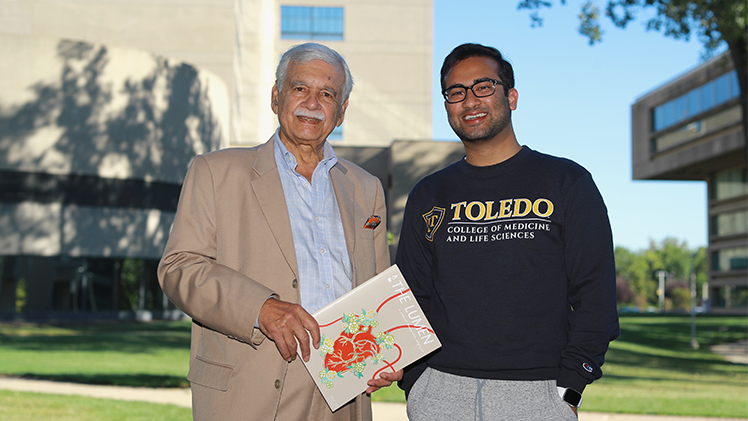 Available online and in a glossy printed edition, the first issue of the nearly 50-page magazine features poems, essays, personal columns, illustrations, paintings and photos by UTMC students, faculty and staff that explore the humanity of medicine on professional and sometimes personal levels.

The concept of medicine as an art that co-exists with painting, literature and music under the umbrella of humanities is important— not just for patients but for physicians.

“I wanted to do this because I could not escape the irony of our situation: Here we were, hoping to treat humans but studying like robots in our rooms,” Agrawal said.  “I wanted to celebrate everything about medicine, not just the science.”

Dr. S. Amjad Hussain, professor emeritus of cardiovascular surgery and humanities, a former member of the UToledo Board of Trustees and a columnist for The Blade, serves as the faculty advisor to the student group behind the magazine.

Hussain said the removal of medicine from humanities is a recent approach.

“There’s not been a collective effort to bring these elements together,” said Hussain, who has spent much of his career advocating for the pairing of medical and the other elements of humanities. “This is a bridge to bring these things together.”

The genesis of The Lumen was in August, 2020, when Agrawal and other members of the Medical Humanities Club had similar ideas for an online literary exploration of art and medicine.

Given the often intense schedule of a medical student, having the capacity to carve out the time to devote to the project was not easy for the student group.

“The whole process was messy and hairy,” Agrawal said. “This is the first time we’ve done anything of the sort.”

While the group originally planned to limit The Lumen to digital-only publication, Hussain suggested they expand to include printed copies. Content wasn’t a problem, with plenty of student submissions for the first issue, and a few from faculty and staff.

“It wasn’t hard to get contributions from my peers,” Agrawal said. “I am, to this day, still surprised by the diversity and talent of our class, and I am grateful that they shared what was in their hearts with the rest of us.”

The goal is to produce a new issue each semester.

“We are optimistically hoping to publish each semester, but we aren’t sure just yet,” Agrawal said. “Be on the lookout for submissions requests soon.”