Did Delta blues musician Robert Johnson sell his soul to the devil at a Mississippi crossroads to become a master guitar player?

Did Black folk hero Stagolee really kill a man over a Stetson hat? 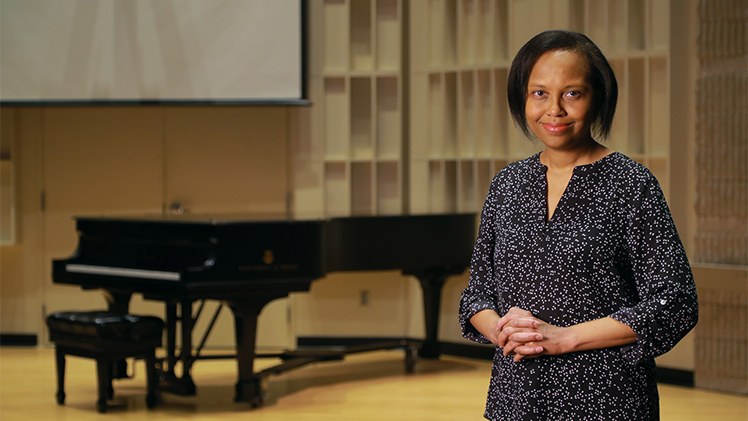 Dr. Kimberly Mack is a scholar of African American literature and American popular music at The University of Toledo. Her book, “Fictional Blues: Narrative Self-Invention from Bessie Smith to Jack White,” will be published on Dec. 18.

A scholar of African American literature and American popular music at The University of Toledo explores in her forthcoming book how blues artists — both Black and non-Black literary and real-life blues musicians — use their work to invent personas that resist racial, social, economic and gendered oppression.

“Fictional Blues: Narrative Self-Invention from Bessie Smith to Jack White” by Dr. Kimberly Mack, UToledo assistant professor of English, is scheduled to be published Friday, Dec. 18, by University of Massachusetts Press as part of its African American Intellectual History series.

“‘Fictional Blues’ is the story of how a range of blues artists, both real and imagined, invented their own personas independent of the so-called authentic blues, which is often predicated on the notion that Black men and women from poor or working-class backgrounds are more naturally suited to understand, and thus perform, the blues honestly,” Mack said. “Far from having ready-made racial and cultural identities, these blues makers have instead fashioned worlds through their own fictionalized autobiographical and biographical storytelling and self-made personas.” 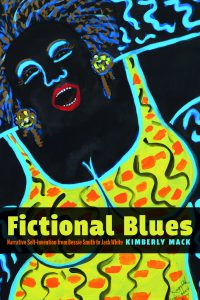 Through tall-tale telling, or the blurring of fact and fiction, Mack says early architects of blues myths took control of their own narratives to reclaim their power in the face of racism, patriarchy and poverty.

Mack uses Bessie Smith, the most popular female blues singer of the 1920s and ’30s, as an example, explaining how her persona as a “transgressive” woman flouted white standards of female respectability “with her frank lyrics about sex, substance abuse and domestic violence and her openly bisexual lifestyle.”

Similarly, Rainey in the song “Prove It On Me Blues” brags about her conquests with women and “dares” the listener to “prove” her relationships.

That fearless and sexually independent legacy echoes in the representation of Shug Avery, the blueswoman at the center of Alice Walker’s book “The Color Purple.”

However, Mack begins her book with Jack White, who as a member of the White Stripes used “a fabricated autobiographical backstory to sidestep the thorny issue of blues authenticity and whiteness.”

“By referring to his ex-wife as his ‘big sister,’ he engaged rural stereotypes focused on sexual intrigue, family kinship and transgressive desire that are part of blues mythology and legend,” Mack said. “The intrigue of not knowing the true relationship between the two members of the White Stripes compelled music journalists and fans to want to know more about them.”

Mack engages a variety of platforms including literary passages, song lyrics, musical performances, music videos and historical and contemporary interviews. Her foray into blues history took her to Chicago, Memphis, Nashville, and Clarksdale and Oxford, Miss.

In the book’s Preface and Acknowledgements, Mack credits her UToledo students for their contributions to her literary effort.

“Thank you to my incredible graduate students at The University of Toledo, specifically students in my fall 2016 graduate seminar ‘The Autobiographical Impulse in 20th-Century American Blues Literature, Drama, and Music,’ who helped me to think through my theorizing about unconventional autobiographical articulation, and where I had the chance to revisit some key literary and musical texts,” Mack said. “Thank you also to the students in my spring 2020 ‘Contemporary Literary Theory and Criticism’ graduate seminar who reminded me to clarify a key idea in the introduction to this book.”

The book is available for preorder at the UMass Press website. Use promo code MAS006 to receive 30% off with free shipping through August 2021.