Paddling and Pondering: Kayaking on the Ottawa River

It was a perfect Sunday in October for a paddle down the Ottawa River. Dr. Charles Beatty-Medina, professor of history, and I planned to follow the river through Ottawa and then Jermain parks with an expected distance of 2.5 miles. It had rained recently, so the water level was elevated, and the forecast called for partial clouds with temperatures in the mid to low 60s.

We met at the new pedestrian bridge, with its new kayak launch, connecting the East Parking Garage and Savage Arena. Because we had two cars, we were able to drive one to the location where we planned to exit the river and drive the other back to the launch. With a car parked at our expected exit downriver, we could paddle with the current and not worry about paddling back against the current through areas we’d already seen. 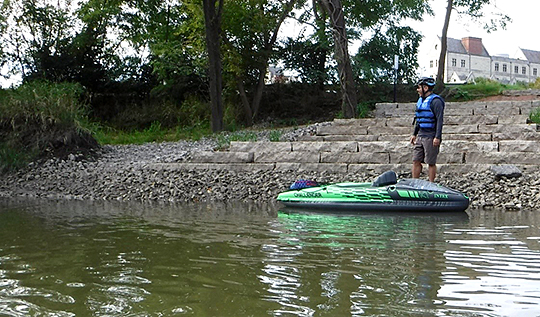 Dr. Charles Beatty-Medina looked at the Ottawa River in October before climbing into his kayak on campus.

We were struck at how quickly the environment transformed. We got on the river with a parking garage to the left and Savage Arena to the right, but within minutes we were fully enclosed within the forested banks of a meandering river and nothing but the sights and sounds of nature surrounding us. We played a game with the various bridges — trying to guess which street we were passing under. Because the view from the river is so different, we were essentially guessing based only on distance we’d paddled and our knowledge of the streets above. Nothing about the habitat along the river was the same.

We spotted a heron as we crossed into Ottawa Park. The heron would take flight as we approached, camp out in a tree downriver — seemingly waiting for us to catch up — then take flight again as we neared. The heron was our guide for a good quarter mile of the trip. Shortly thereafter, we came to our first obstruction — a large tree laying across much of the river. Luckily, there was a gap to the right and to the left where the current was faster, which meant we could ‘shoot the chute’ over and between the trees limbs. 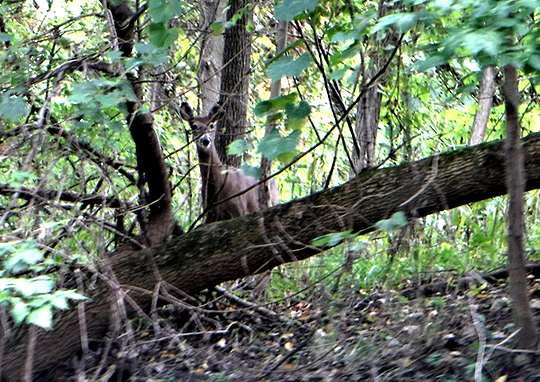 A deer watched as Dr. Christopher Martin and Dr. Charles Beatty-Medina traveled by kayak on the Ottawa River.

Less than a mile down river, we heard a rustling in the foliage ahead and spotted several deer out for a stroll. They were as curious about us on the river as we were of them on the land. The deer may have been trying to warn us, because shortly after their sighting, we heard the eerie sound of water moving quickly downhill and over rocks: We’d come upon a rapid.

Charles’ Rapid (we named it) was not difficult, but Charles did have an inflatable kayak, which meant a sharp rock could puncture it. We opted to risk it and ran the rapid straight down the middle. Most of the time, the deepest water is in the middle of the rapid, and, thankfully, there was more aerated water nearer the sides, suggesting that rocks are closer to the surface than in the middle — the safer route for a kayak, especially one full of air.

Paddlig further east into Ottawa and Jermain parks, we came across logs blocking most or all of the river three or four different times. We later learned trees had fallen naturally and usually are left to stimulate the ecosystem. But unless you can paddle under or over them, you’re schlepping your kayak onto the bank, up the mud, and back down to the river on the other side. Our muddy carries over the logs are the ecosystem’s gains. 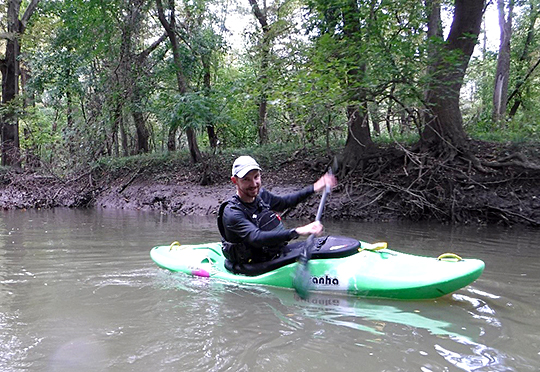 The log dams also function as collection points for the sadly large amount of garbage that finds its way into the river. We hope to find a student group on campus who would be interested in an Ottawa River cleanup. We could bring trash bags with us for a paddle, scoop as much of the garbage behind the log dams as the bags hold, and place the full bags along the bank to retrieve and properly dispose of once off the water.

When we left our car along the road where we intended to exit the river, we thought we should walk down to the river to study the location so that we would be able to know, on the river, when we were there. A blue empty chip bag we found nearby served as a nice marker, which we tied to a branch on a tree reaching over the water. Once I spotted the bag, I knew our journey had come to an end.

Ottawa and Jermain parks are beautiful from the land, but we encourage you to see them from the perspective of the river, which, in our experience, changes everything. In season, students can borrow a kayak, paddle and a life vest (which you must wear) for free from Recreational Services. We recommend getting out when the spring buds are appearing, summer blooms abound, or fall leaves are ablaze; these sights, especially from the seat of a kayak meandering down the river, take the breath away.

Martin is a visiting associate professor of philosophy and religious studies, and director of the Roger Ray Institute for the Humanities.