UToledo Study Estimates Impact of Opioid Epidemic at $1.6B in Northwest Ohio

Fatal overdoses tied to Ohio’s ongoing opioid epidemic cost the metropolitan Toledo economy $1.6 billion and more than 2,000 jobs in 2017, according to a new study by The University of Toledo.

At $1.6 billion, the total economic impact of the opioid epidemic is equivalent to approximately 4.5% of the region’s gross domestic product — or roughly the same amount of economic activity generated annually by the entire private construction industry.

“The University of Toledo has an important role to play in addressing the major issues that affect northwest Ohio and beyond,” UToledo President Sharon L. Gaber said. “This research provides another piece of the puzzle as we work together to confront the opioid epidemic.” 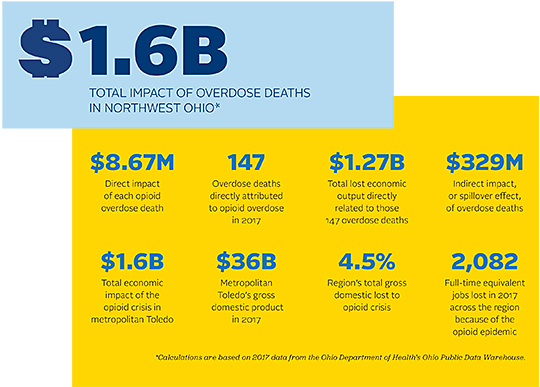 The research was led by Dr. Oleg Smirnov, associate professor of economics, in close collaboration with members of The University of Toledo Opioid Task Force.

“Over a relatively period of short time, the number of deaths from opioid overdose has skyrocketed, and the crisis doesn’t show any signs of abating,” Smirnov said. “This report helps give us a better understanding of how the epidemic affects our region and also provides a benchmark to evaluate the effectiveness of our community’s ongoing response.”

Among the report’s key findings:

• Premature deaths caused by the opioid epidemic cost metropolitan Toledo the equivalent of 2,082 jobs in 2017.

• While Narcan is relatively expensive at approximately $130 per dose, there is clear evidence the economic benefit outweighs the cost of administering the drug.

“These new findings add valuable context to our understanding of and response to the opioid epidemic,” said Dr. Amy Thompson, vice provost for faculty affairs, professor of public health, and co-chair of the UToledo Opioid Task Force. “The research can be used to advocate for funding that goes toward prevention efforts and treatment of opioid use disorder. It also can be used to inform local businesses how this epidemic is affecting the job market and creating financial loss in the community.”

The report’s calculations are based on data from the Ohio Department of Health’s Ohio Public Data Warehouse, which documented 147 fatal opioid overdoses in Lucas, Wood, Fulton and Ottawa counties in 2017. Data from 2017 is the most recent finalized figures available.

State records show those four counties had 22 deaths attributed to opioid overdose in 2007. The state data relies on the official cause of death listed on state-issued death certificates and differs slightly from fatal overdose data from local sources.

“While it may seem morbid to put a price on human life, there are established economic models that show how an individual’s premature death ripples through the economy,” Smirnov said. “This report shows just how costly each death is to our entire community, on top of the personal loss of a friend, brother, sister or parent. The opioid crisis may appear hidden to some, but it affects all of us.”

To calculate the economic cost of a fatal opioid overdose in metro Toledo, researchers began with a federally established finding that a premature death has an economic cost of $9.4 million. By adjusting for northwest Ohio’s lower per-capita income and lower cost of living, they arrived at a figure of $8.6 million per premature death and $1.27 billion in lost economic output in 2017.

Each fatal overdose also hurts the economy indirectly. As spending and demand for goods and services shrink, employers may begin to reduce staffing. In turn, individuals who have lost their jobs cut back on their own spending. UToledo researchers calculated those indirect, or spillover, effects cost the local economy $329.2 million in 2017, while reducing full-time equivalent employment by 2,082 jobs.

The total economic burden in UToledo’s report does not include calculations from non-lethal overdoses. While those incidents do have costs associated with them — emergency room visits, criminal justice proceedings and mental health services, for example — the spending stays within the local community.

The report also offers some hints that the region’s response to the opioid epidemic is making a difference.

For example, a comparison of overdose-related 911 calls received by Lucas County dispatchers in 2016 and 2017 to the total number of overdose deaths in those years found the mortality of opioid overdoses declined from 8% in 2016 to 6% in 2017.

Researchers attribute that to first-responders dealing with opioid overdose more effectively, particularly with the use of naloxone.

UToledo’s research also supports the notion that the expanded use of naloxone prevents not only additional deaths, but also significant damage to the local economy.

While first responders in Lucas County administered an estimated $1 million-plus worth of naloxone in 2017, a single premature death would have cost the regional economy $8.6 million.