Business Graduate Strives to Make Most of Her Opportunity

When she arrived at The University of Toledo, Lesline Sims had a simple goal.

“Learn and gain knowledge from every subject I take, get involved in student organizations and lift other students up as I climb,” Sims said.

A driven, first-generation student, she’s done exactly what she set out to do. Sims graduated in December with degrees in accounting and information systems, but that hardly scratches the surface of her achievements.

Sims studied multiple subjects simultaneously, which was her foremost reason for choosing UToledo.

“The admission counselors were saying, ‘You can double major,’ and they showed me how easy it was to do that,” she said. “So, I decided to double major because that way one can have more diversity in their skill sets.”

From there, her path was straightforward: Sims chose accounting and information systems as her dual majors since they dovetailed well with her career goals, giving her the chance to maximize her time on campus. That choice, however, created an additional challenge. Accounting and information systems offered little class overlap, meaning, to pursue that path would require considerable extra work.

“Information systems is a part of every major in a sense, but it was hard trying to do both of those majors at the same time because they’re both difficult in their own ways, and I had to take a lot more classes than I expected,” Sims said. “But I really enjoyed it. I enjoy the hard stuff and I like to challenge myself.”

Challenge herself is exactly what she did. On top of her dual major, Sims dove into many student organizations and activities. She served in Impact Movement (a Christian campus ministry), took a leadership role in the Institute of Management Accountants, served on the student academic grievance council, the College of Business and Innovation’s student retention committee, and worked as a peer mentor in the Office of Multicultural Student Success.

In short, she was busy.

She even managed to work in a semester studying abroad, albeit one that was cut short by the COVID-19 pandemic, a disappointment she took in stride.

“I will never forget this experience, no matter what,” she said. “From all the things that were happening around me, I learned to adapt and become more flexible when things of this nature happen in the future.” 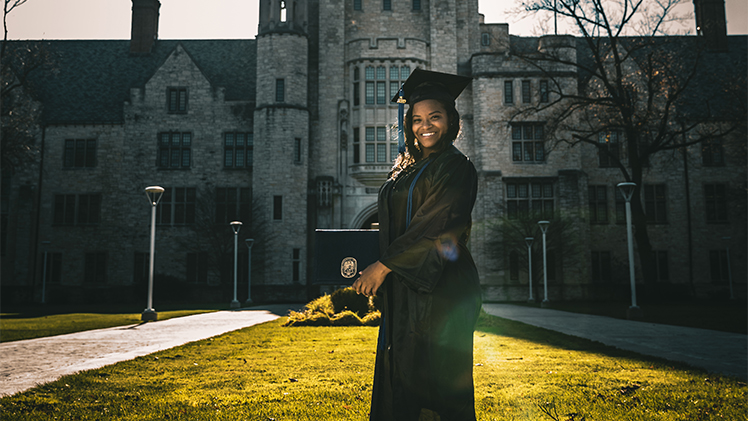 Sims studied multiple subjects simultaneously, which was her foremost reason for choosing UToledo.

Her can-do attitude and relentless drive drew the attention of the College of Business and Innovation faculty, including Distinguished University Lecturer Teresa Keefe.

“Lesline showed up as a student and took advantage of the opportunities available to every UToledo Rocket,” Keefe said. “She never missed class nor an assignment. She was involved in student organizations, visited faculty during their office hours, went to the job fair and secured an internship. She paired her intellect with the right attitude and worked her way to a full-time job offer.”

That job offer is no small achievement, either. After graduation, Sims will start in a role in Marathon Petroleum’s accounting department, with the goal of parlaying that job into a larger position using her information systems background. It’s a plan that’s sure to succeed say those who know Sims best.

“When Lesline begins her job as an accountant at Marathon in the spring, I have no doubt that she will make meaningful contributions to the team,” said Whitney Valencia, Sims’ academic advisor. “I think her educational preparation and strong analytical skills will serve her well in this new role.”

Wherever she ends up, though, Sims said she knows she has what it takes to succeed, and that she’ll be ready to take advantage of every opportunity.

“I’m a first-generation student coming from a single-parent household. I have nine siblings with me being the youngest,” Sims said. “I had to figure a lot of stuff out on my own. But with the support from family, professors, advisors and donors, I was able to figure out the rest from there. Now all I can say is, ‘Thank you, Lord!’ ”