While Eleanor Ajoku’s story ends in triumph — her graduating in December with a chemical engineering degree — the significant personal challenges she overcame define not just this moment in her life, but everything that will come after it.

Challenges are hardly impediments for Ajoku. In fact, she appreciates the opportunity to push herself.

An international student who transferred to UToledo, Ajoku was originally a pre-med major, until a conversation with her mother convinced her to study chemical engineering.

“I looked at my grades and noticed I was doing really well in all of the engineering tech-related courses. And I like solving problems, I like overcoming challenges and I like to push myself,” she said. “So my mom said, ‘Why don’t you consider chemical engineering?’ ”

Ajoku joined UToledo’s chemical engineering program and thrived, becoming an active member of the National Society of Black Engineers and the African People’s Association on top of completing three semesters’ worth of co-op placements. Even amid a pandemic, she arrived at her final semester well-prepared to graduate in December.

And then, as Ajoku finished summer classes at UToledo, she learned that her sister had been killed in a car accident. She had lost her dad to a heart attack the previous year. Ajoku steeled herself, pledging that she’d finish strong despite the tragedy.

Just weeks later, though, Ajoku was in a serious car accident herself. 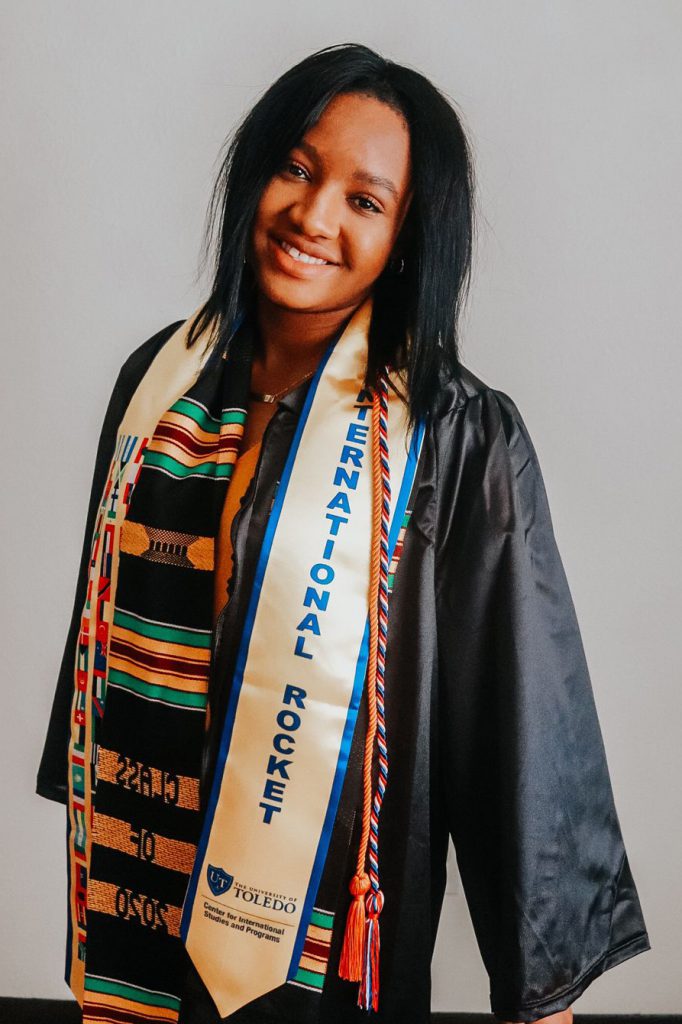 Eleanor Ajoku overcame personal tragedies to achieve her goal of graduating from UToledo in December with a chemical engineering degree.

“My car was pushed into oncoming traffic where it collided with two other vehicles, and then a third vehicle hit us as well,” she said. “I remember just falling in and out of consciousness, and the next thing I realized, I woke up in a hospital.”

That was Oct. 16. There was just weeks to go until graduation, and with major surgeries on the docket, a broken femur and humerus, and numerous bruises, aches, pains and scrapes, Ajoku had moments of self-doubt.

“Why is this happening right now? Why am I going through this? Why are all these tragic things happening?” she wondered.

But Ajoku didn’t give up.

She reached out to Tracey Hidalgo in UToledo’s Office of International Student and Scholar Services for help with coordinating her class schedule. And then she got to work — despite not being able to walk at first or even write with her dominant hand.

“It was when I first took a step from my bed that I realized, ‘OK, I’m able to stand up from my bed, then I can take my classes and exams and push through.’”

Despite warnings from her doctors that she would have to reschedule her graduation, Ajoku plugged away.

“My writing was really bad and slow,” she said. “But the professors were helpful, and I also got assistance from Student Disabilities Services.”

Even with that help, much of her success came from within. 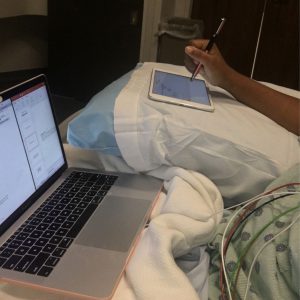 After a horrendous car accident, Ajoku plugged away on her UToledo courses from her hospital room.

“Eleanor has shown the power of the mind,” said Hidalgo, who had a front-row seat to Ajoku’s daily journey to recovery. “She has shown The University of Toledo’s value of excellence. Even when life did not go her way, she chose to continue to excel in her pursuit of obtaining her chemical engineering degree.”

Ajoku didn’t just finish, she finished strong, earning As and Bs on her finals and registering a 3.2 GPA during her final semester as an undergrad, even as she dealt — and still deals — with the effects of her accident.

“I’m still finding glass chips that I’m plucking out of my body,” she said, “which is just crazy.”

Ajoku’s attitude toward trying circumstances is different than most.

“I feel like normally when people go through situations like this, they don’t do really well with school,” she said. “For me, it was the opposite. I was able to fix my mind toward graduating. It was that extra push that allowed me to sit down and study hard for school.”