Dan Saevig has been part of The University of Toledo every day for more than half of his life, first as a student and then as an employee at the institution he loves.

That will change soon: The associate vice president of alumni engagement and executive director of the UToledo Alumni Association will retire Monday, March 2. 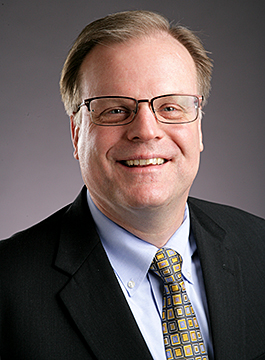 “I love The University of Toledo; I know its life-changing powers,” Saevig said.

The native of Oregon, Ohio, received a bachelor of arts degree in communication and a master of business administration degree from UToledo in 1984 and 1989, respectively.

“Dan has dedicated his life to The University of Toledo. With his Rocket passion and energy, he has helped grow UToledo’s alumni participation, as well as alumni programs and donations,” President Sharon L. Gaber said. “We thank Dan for his tremendous service to the University for 27 years.”

Under Saevig’s leadership, the Office of Alumni Engagement has:

• Grown UToledo Alumni Association membership five consecutive years; this includes an 8% increase last year and an 8% increase so far this fiscal year, totaling more than 27,000 members around the globe.

• Helped increase alumni donations from 2.59% in 2015 to 5.37% last year as measured by U.S. News & World Report, with a portion of membership dues as a gift to the UT Foundation; 66% of donors last year were members of the UToledo Alumni Association.

“When I started working in the alumni office, we were mostly promoting events in Toledo. Now we truly are a national program,” Saevig said.

“I can leave UToledo knowing we have the right person to lead the Office of Alumni Engagement for the next 20 years,” Saevig said. “[William] Billy Pierce is that person. He’s an alumnus, he’s well-liked, he’s personable — alumni will enjoy connecting with him.”

A longtime UToledo donor, Saevig is giving a $150,000 parting gift to his alma mater — provided there is no official sendoff celebration.

“The donation is a thank-you for the University’s impact on me and my family,” he said. “It’s important for employees to give back. We are blessed to be working at UToledo. I wouldn’t be who I am without the friendships and relationships I developed here over the years. I want to show my support for the institution that I love.”