New research from The University of Toledo College of Medicine and Life Sciences suggests it may be possible to treat septic shock with drugs that are already part of the clinical repertoire.

Screening existing pharmaceutical agents for unexpected applications is increasingly seen as a valuable tool for establishing new treatments, particularly within the field of oncology research. 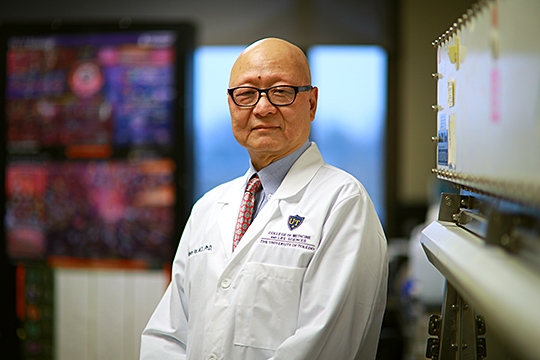 Dr. Kevin Pan, professor and chair of the UToledo Department of Medical Microbiology and Immunology, is applying that innovative approach to sepsis, a life-threatening condition in which the body’s extreme immune response to infection damages its own organs.

“Severe sepsis is a big problem in the clinic,” Pan said. “There are about 750,000 annual cases in the U.S. alone, and we do not have very effective treatments beyond targeting the original infection with antibiotics. We are hoping to find new ways within our existing drug library to regulate the immune response and directly treat sepsis.”

By focusing on existing drugs, researchers hope to advance therapies more quickly and with less cost than the novel drug discovery process.

“Our research shows rolipram can reduce inflammatory cytokine production and increase mouse survival. This suggests rolipram might be a novel therapeutic agent for fighting against sepsis in the clinical setting,” Pan said.

Rolipram was originally developed as an anti-depressant and has been studied for a number of other potential applications, including chronic obstructive pulmonary disease. Pan’s team is the first to show it might protect against sepsis.

Treatment for sepsis is largely limited to flooding the body with antibiotics and fluids. However, the growing problem of antibiotic resistance means many bacterial infections can be difficult to kill, allowing the body’s overheated immune response to go on unchecked.

By exploring new ways to modulate that immune response, Pan and his collaborators hope to provide a complimentary treatment to go along with antibiotics that can prevent damage to critical organ systems.

“This is early stage research, and rolipram is known to have difficult side effects. However, our work proves the potential of repurposing drugs to treat septic shock,” Pan said. “We plan to continue working with rolipram, and are beginning tests on a number of other drugs.”