No. 4 seed Toledo (17-12) will begin its journey to claim the 2016 Mid-American Conference Tournament crown Wednesday, March 9, when it battles No. 5 seed Akron (18-12) in Quicken Loans Arena in Cleveland.

Tip-off time is slated for approximately 2:30 p.m., and the game can be seen on ESPN3. 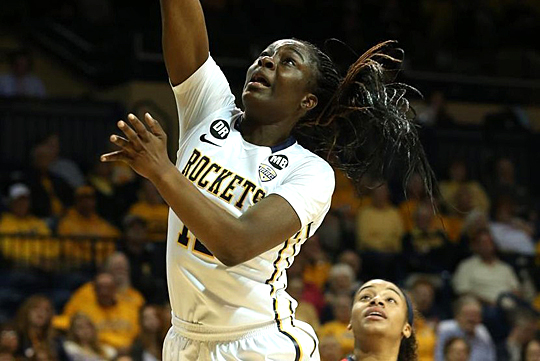 Junior Janice Monakana and the Rockets will play Akron Wednesday, March 9, in the MAC Tournament in Quicken Loans Arena in Cleveland.

The Rockets enter the postseason tourney having won eight of their last 11 games to secure a bye to the quarterfinals.

Most recently, Toledo suffered a 68-58 setback to Ball St. March 5 in its regular-season finale before 4,267 fans in Savage Arena.

The Cardinals won the division showdown on the interior, finishing with a 32-20 edge in points in the paint and a 40-32 advantage on the boards.

For the year, the Rockets are fueled offensively by the trio of All-MAC players Harris, Bravo-Harriott and junior Janice Monakana, who are averaging 14.5, 11.1 and 11.0 points per game, respectively.

The Zips advanced to the quarterfinal round of the post-season tourney with a 66-54 victory against No. 12 seed Miami at home on Monday. 2015-16 first-team All-MAC honoree Anita Brown paced UA with 29 points, five helpers and five thefts.

Akron, which is 7-8 away from home this season, features three players averaging at least 10.0 points and is led by Brown and Hannah Plybon at 21.6 and 16.4 points per game, respectively.

UT and UA will meet for the second time this year and 52nd time overall. The Rockets dropped an 81-71 decision against the Zips in James A. Rhodes Arena Jan. 20.

The cross-division foes also have squared off on five occasions in the MAC Tournament, with Toledo holding a 4-1 (.800) edge in the postseason. Two year ago, the Rockets suffered an 83-69 setback in the third round of the postseason event.