Junior guards Sophia Wiard and Quinesha Lockett scored 19 points each to lead No. 1 seed Toledo to an 80-67 victory over No. 8 seed Ohio in quarterfinal action of the MAC Women’s Basketball Tournament at Rocket Mortgage Fieldhouse in Cleveland on Wednesday.

Wiard was one rebound shy of a triple double, adding 10 assists and nine rebounds in 40 minutes of play. Lockett scored 10 of her 19 points in the final 10 minutes to help the Rockets seal the victory in what had been a close contest through three quarters. 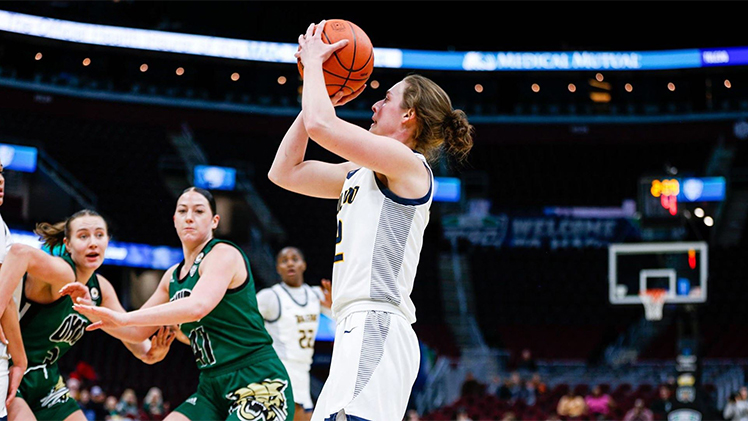 Sophia Wiard finished with 19 points, 10 assists and nine rebounds in Toledo’s 80-67 win over Ohio in the quarterfinals of the MAC Tournament on Wednesday.

Sophomore forward Sammi Mikonowicz added 11 points and nine rebounds, while sophomore guard Khera Goss chipped in with 10 points. Toledo made 29-of-60 shots from the field (48.3%) and outrebounded the Bobcats, 46-37.

Toledo (26-4) held a 34-32 halftime lead and led Ohio (15-14) by just five points headed into the fourth quarter. The Rockets outscored the Bobcats 22-14 in the fourth quarter to advance to the semifinals. Toledo will play No. 5 Ball State on Friday at 10:00 a.m. after the Cardinals beat No. 4 Northern Illinois 60-54 on Wednesday.

Head Coach Tricia Cullop said she was relieved to get past Ohio, the only MAC team to defeat Toledo in the regular season.

“I thought going into this game that Ohio was the best eight-seed in the country,” said Cullop, who was named MAC Coach of the Year on Tuesday. “We knew it was going to be extremely tough. I’m very, very proud of our kids. I thought Sophia Wiard put together one of the best performances of her career in a Toledo uniform. And when Quinesha Lockett was in foul trouble, I thought Khera Goss played exceptionally well. Quinesha, in the final quarter, was just tremendous and helped us put the game away.”