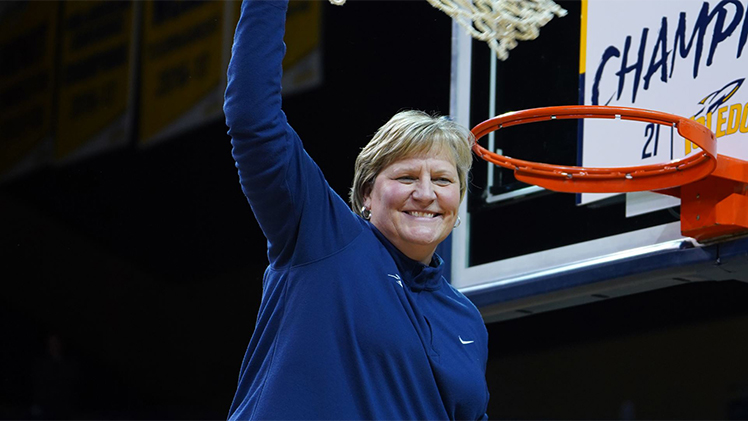 Now in her 14th season as Toledo’s head coach, Tricia Cullop was named MAC Coach of the Year following her team’s regular-season championship title this year.

O’Brien, who is retiring on April 30, said the decision to extend Cullop’s contract was made in consultation with incoming Vice President/Director of Athletics Bryan Blair, who assumes his post on May 1.

“Bryan and I have spoken about extending Tricia’s contract, and we are in total agreement on the decision,” said O’Brien.

Now in her 14th season as Toledo’s head coach, Cullop was named MAC Coach of the Year following her team’s regular-season championship title this year. The Rockets are 25-4 overall (19-1 MAC) and enter this week’s MAC Tournament as the No. 1 seed. During her tenure, Cullop has led Toledo to three MAC regular-season titles, a MAC Tournament Championship and NCAA appearance in 2017, and a WNIT Championship crown in 2011. Her 292 career wins are the most in program history.

“I would like to thank UToledo President Gregory Postel, Vice President and Director of Athletics Mike O’Brien and our incoming Vice President and Director of Athletics Bryan Blair for their trust and belief in me to continue leading our Toledo women’s basketball program,” said Cullop. “I am honored and grateful to receive this extension and to be given the opportunity to continue working at a place I love with people I truly enjoy.”

Toledo experienced five-consecutive losing campaigns prior to Cullop’s arrival in 2008, but she quickly turned the Midnight Blue & Gold into a powerhouse in the MAC.

The Rockets have amassed an impressive 292-156 overall record and a 160-85 conference mark during her tenure. Her teams have made eight post-season appearances, won or shared four MAC titles, won at least 24 games in seven seasons, and twice set the school mark with 29 wins (2010-11 and 2012-13). The Rockets’ 19 league wins this past season also established a school record.

Cullop’s teams have thrived in the classroom as well, posting team grade point average above 3.2 in 16 of the past 26 semesters. Toledo also finished in the top four in the MAC in Academic Progress Rate (APR) in each of the last five years.

A 1993 graduate of Purdue University, Cullop previously served as head coach at Evansville from 2000-08, winning a league co-championship in her final season with the Purple Aces.