UPDATED: Mid-American Conference Commissioner Jon Steinbrecher announced March 12 the remainder of the 2020 MAC men’s and women’s basketball tournaments has been canceled due to concerns about the coronavirus.

Win and advance: Toledo upset No. 1 seed Central Michigan, 78-71, Wednesday in the quarterfinals of the Mid-American Conference Tournament in Rocket Mortgage FieldHouse in Cleveland. 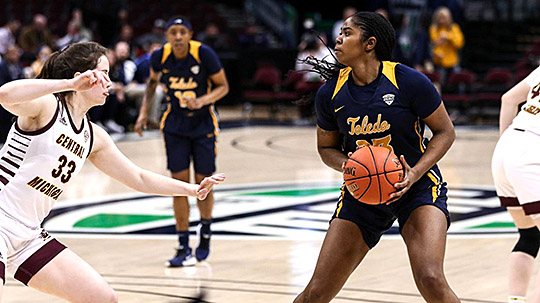 Junior Tanaya Beacham had 14 points, seven boards and one steal in Toledo’s upset victory against Central Michigan March 11 in Cleveland.

Toledo outscored the MAC regular-season champion Chippewas 20-5 in the pivotal third period to take control of the neutral-court matchup. The Rockets held CMU (23-7) scoreless for the final eight-plus minutes in the quarter to establish a lead they would not give up.

Molly Davis knocked down a triple to put CMU in front 44-39 at the 8:31 mark in the third quarter. The Chippewas would not score again until MAC Player of the Year Micaela Kelly converted a trey with 9:27 left in regulation. Toledo forced Central Michigan to miss 12 of its 14 shots in the period, and the Chips shot a frigid 14.3% from the field.

Toledo also benefited from eight points, a team-high eight caroms, a contest-best seven helpers and three steals to advance to the MAC’s Final Four for the seventh time in 12 years under Head Coach Tricia Cullop.

Toledo also finished with 13 assists, compared to a season-tying low 10 turnovers to run its record to 7-4 all-time against the Chippewas in the conference tournament.

Kyra Bussell paced Central Michigan with a game-high 23 points, including 21 in the first half, while Kelly added 21.