Toledo broke a school record Tuesday by capturing its fifth tournament crown of the season with an eight-stroke victory at the Kingsmill Intercollegiate hosted by the College of William & Mary in Williamsburg, Va. The tourney was held on the par-72, 6,043-yard River Course at the Kingsmill Resort.

“The conditions were really tough [Tuesday] with the wind and pin placements, and I was really proud of how we held on for the victory,” Head Coach Nicole Hollingsworth said. “We received contributions from everyone throughout the tournament, and that’s what you need to be successful.” 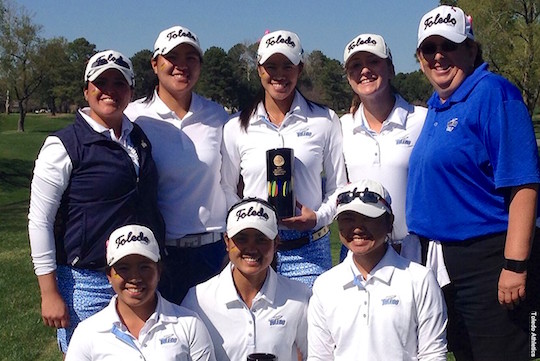 The women’s golf team won its fifth tournament of the season Tuesday in Virginia.

Senior Sathika Ruenreong led the Rockets by earning medalist honors for the fourth time in her collegiate career. She edged the Tribe’s Alessandra Liu (72-71-75=218) by finishing one stroke in front at one-over par 217 (71-73-73). Freshman Natcha Daengpiem joined Reunreong in the top five with a season-best fifth place showing at eight-over par 224 (75-74-75).

“Sathika’s play was phenomenal, and it was really fun to watch her attack the golf course,” Hollingsworth said. “She’s had a tremendous career, and it’s great to see her finishing strong.”

Sophomore Napaphan Phongpaiboon competed as an individual and was tied for 29th place entering Tuesday’s action but was forced to withdraw.