Varsity T Hall of Fame Nominations Due May 1

Nominations for the 2022 class of the Varsity T Hall of Fame are being accepted now and are due Sunday, May 1.

The Hall of Fame Banquet will be held on a date to be determined in the fall, with the 2022 class being presented at halftime of a Toledo football game. 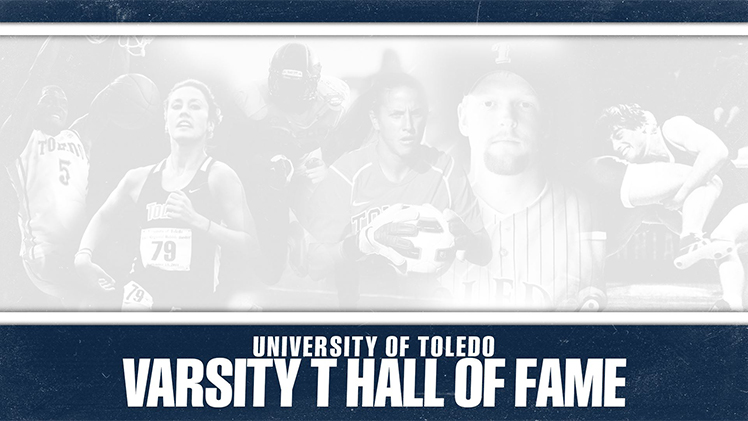 Nominations may come from any source. Nominations from previous years automatically carry over to the next year.

Email nomination forms along with all other supporting data by May 1 to Paul Helgren at
paul.helgren@utoledo.edu

Criteria for Membership
1. Any former varsity student-athlete who has performed with athletic distinction at the University of Toledo. The student-athlete need not necessarily be a graduate. For the 2022 class, nominees must not have been active on or after July 1, 2017.

3. Members will be chosen by a 3/4 vote of the selection committee.

Procedures for Hall of Fame Selection
1. Anyone may submit a nomination to the Varsity T Hall of Fame.

2. The nomination must be in writing. Nominations should be supported with as much historical data (records, clippings, support letters, etc.) as possible of consideration by the selection committee.

3. ALL nominations/supporting materials/letter of recommendation, etc. MUST be submitted to the Athletic Department by the deadline. Items submitted after this date WILL NOT be reviewed by the committee until next year’s nomination process commences.

4. Names of unsuccessful nominees will remain on the ballot in perpetuity. There shall be no limit to the number of times a person can be considered by the selection committee. A list of current nominees can be found at UTRockets.com/HOF.

Hall of Fame Recognition
1. Members will be honored at a Rocket football game.

2. A special section of Savage Arena is dedicated to Hall of Fame members, and inductees’ photos will be displayed there.

3. Members will be presented a commemorative plaque at the 2022 Varsity ‘T’ Hall of Fame Banquet.