Rockets everywhere helped propel The University of Toledo’s Day of Giving to new heights, with a collective total of 3,334 donors contributing $1,322,241. Both were record highs for the fourth annual campaign, held for 36 hours April 7-8.

The total number of donors exceeded the campaign’s original goal of 2,021 by nearly 65%. 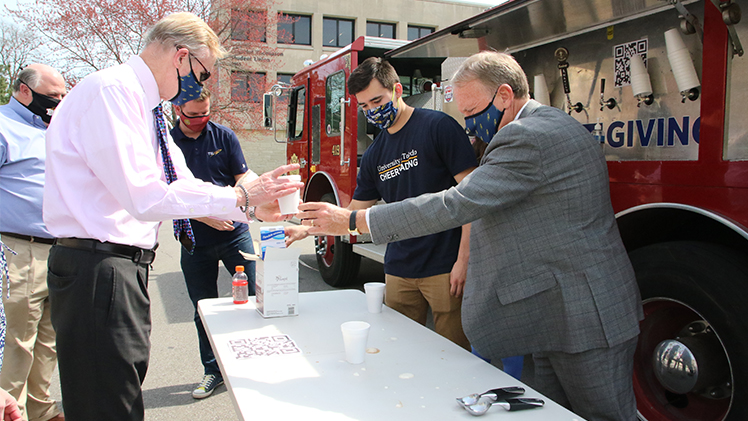 In deciding how their gifts would be designated, donors were able to choose from more than 2,000 funds available at The University of Toledo Foundation, supporting scholarships, athletic and educational programs, research, healthcare and community services which make an impact throughout northwest Ohio, the Great Lakes region and elsewhere.

While festivities were limited compared to previous years due to COVID-19, complimentary root beer floats were available to UToledo campuses courtesy of Patron Saints Brewery, Toft’s Ice Cream and Ladder 419; Domino’s Pizza served up slices to faculty and staff; and outdoor games were hosted by the Division of Student Affairs.

Area businesses contributed to Day of Giving at an unprecedented level. Before and during the campaign, customers at participating locations of The Blarney Irish Pub, Jersey Mike’s Subs, Little Caesars Pizza and others had the opportunity to include a campaign donation as part of their purchase.

“We owe a huge thanks to Rockets everywhere for making 2021 Day of Giving such a success,” said Cheryl Zwyer, senior associate vice president for development at The University of Toledo Foundation.

“Especially given the challenges of the past year, the support of our alumni, students, faculty, staff and friends around the world is more meaningful than ever. Each gift we received is one more opportunity for a deserving student, another potential breakthrough for our researchers or a much-needed upgrade for our medical facilities.”

For more information about the impact of the Day of Giving campaign or to support a student, college or program you care about, visit utfoundation.org.