Tickets — $10 for students and $35 for general admission — are available at the Savage Arena Ticket Office, online at utrockets.com and by phone at 419.530.GOLD. 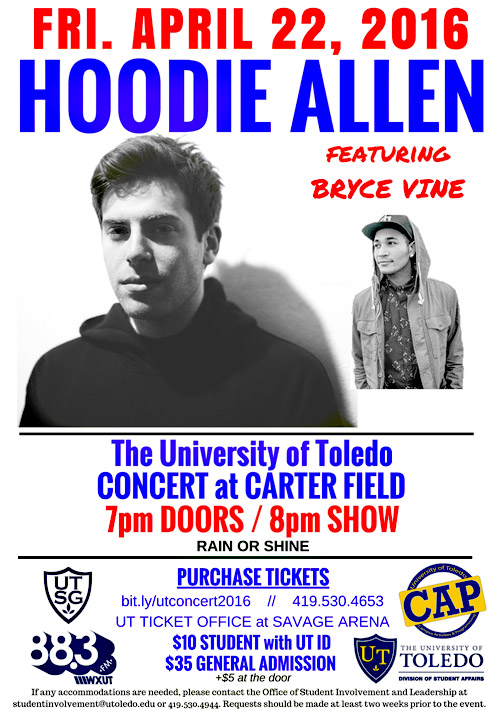 Without a label or management, Allen’s 2012 EP All American landed in the Top 10 of Billboard’s Top 200, moving more than 100,000 units. In addition to sold-out worldwide tours of his own, Allen has played shows alongside everybody from Passion Pit to Macklemore.

In January, he released Happy Camper, and People Keep Talking came out in 2014.

“I wanted to build a style rooted in hip-hop, pop and soul that combined everything I loved,” Allen said. “The flow and wordplay are as important as the hooks are. I aimed for [ People Keep Talking] to be cohesive in terms of the sound and story. The songs contribute to the narrative, but they can stand on their own as well.”

In the end, he’s delivering something fans can live with — literally.

“I wanted to give people something to escape to — that can be the perfect soundtrack to anything they go through on a daily basis,” Allen said. “When a record connects to a part of someone else’s life, what more can you ask for?”

Allen and Bryce will perform rain or shine.

The concert is presented by Campus Activities and Programming, and the UT Division of Student Affairs.

For more information, go to http://bit.ly/utconcert2016.