Hunter M. Eby knew he wanted a career in healthcare following his epilepsy diagnosis at age 11.

“It has presented me with many challenges in my life but also a novel perspective and experience of chronic illness that many individuals my age might not have,” Eby said.

Eby has been accepted to medical school, but first he’s adding another degree to his resume by earning a master of science in biomedical science with a specialization in bioinformatics, proteomics and genomics from the College of Medicine and Life Sciences. The soon-to-be two-time graduate of UToledo also has a bachelor’s degree in biology.

As an undergraduate, Eby and his physician made the decision to take him off of his epilepsy medicine. While he didn’t have additional grand mal seizures, Eby said he did suffer from absence seizures that hampered his education and academic growth.

“They present as if I’m staring off into space,” he said. “The duration of these seizures varies and during this time I’m in a state of unawareness. I don’t remember anything that happens. It made taking tests very difficult to nearly impossible.”

Eby made the decision to continue his academic growth in a master’s degree program before applying to medical school. He was introduced to the field of bioinformatics by a graduate student during his time conducting undergraduate research with Dr. Heather Conti, associate professor of biological sciences.

He liked the interdisciplinary nature of the bioinformatics field, as well as learning about the analysis tools to identify biomarkers associated with diseases and the potential to identify new drug targets for treating them.

“It was hard for me not to imagine identifying the gene, protein or kinase in myself that was causing me to have these seizures,” he said. “My thoughts raced with questions like, ‘What if I could identify the gene that caused epilepsy?’ or ‘Find new therapeutics that were not as harsh as traditional anti-convulsive medication.’ ”

As part of his graduate program, Eby again got involved in academic research. He joined the lab of Dr. Robert McCullumsmith, professor and chair of the Department of Neurosciences in the College of Medicine and Life Sciences, using data analysis to identify existing drugs that could be potential candidates for treating COVID-19. 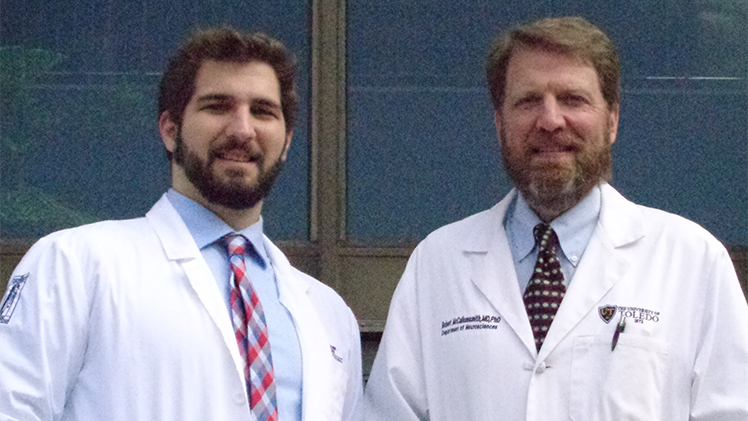 As part of his graduate program, Hunter Eby, left, joined the lab of Dr. Robert McCullumsmith, professor and chair of the Department of Neuroscience in the College of Medicine and Life Sciences, to identify drugs as candidates for treating COVID-19.

“Hunter represents the best of The University of Toledo,” McCullumsmith said. “His journey touches on undergraduate, graduate and professional degrees at UToledo, and he is clearly a product of these outstanding programs. Combined with his drive, passion and natural ability, Hunter’s future as a physician-scientist is without limit.”

In addition to his demanding research and academic responsibilities, Eby also pursued the personal passion of reducing the stigma against food insecurity. He remembers not being able to drive during a period of time because of his epilepsy, and, as a result, his options for fresh and healthy foods being limited.

UToledo’s addition of Rocket Fuel food pantries on Main Campus and Health Science Campus excited Eby and he became an advocate, coordinating with volunteers to help keep the service stocked with food and making sure students not only know about the resource but feel comfortable using it. Eby was featured in a story about food insecurity by the Association of American Medical Colleges.

“I want every student to be able to perform at their peak so they can achieve their highest potential,” he said.

Eby also has been involved as a student ambassador for the College of Medicine and Life Sciences, where he plans to stay a few more years having been accepted into the doctor of medicine program. He also is applying to a Ph.D. program.

“I will be here for a while,” he said, “hopefully unraveling the mysteries of epilepsy and cognitive disorders.”