A senior on The University of Toledo women’s golf team, Tumfong was admitted to the hospital that day, ending her college golf career and thrusting her into a battle for her life. What made matters worse was the fact that the native of Thailand was half a world away from home.

Her ordeal began innocently enough. She noticed strange bruising in her mouth that eventually spread to her arms and legs just prior to her final round March 1 at the Florida State Match-Up in Panama City, Fla. After returning to Toledo, doctors initially thought Tumfong may have had an allergic reaction to aspirin. But additional tests were run. Tumfong could barely believe the devastating news.

“At first I was hoping my diagnosis might be false because I barely felt sick,” Tumfong said. “I was thinking I would still be able to play the rest of our season. But once the doctor told me I did have AML, I felt sad that I wouldn’t have the chance to play in my last MAC Championships.”

The opportunity to play at MAC Championships was something Tumfong was looking forward to since finishing second at last year’s conference tournament. That momentum carried over to this past fall when she played the best golf of her Rocket career, posting a 74.4 stroke average.

“This year was really fun for me,” Tumfong said. “I saw improvement in my game. Even though my season was cut short, it is still super-fun looking back. Coach Jenny [Coluccio] taught me to learn from my mistakes. This not only helped me on the golf course, but life in general, too.”

“Sara was beginning to reach her potential as a golfer,” Coluccio said. “Her confidence on the golf course was getting stronger every day and that translated to her everyday life.” 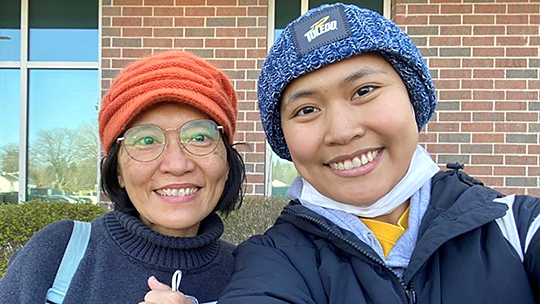 Saranlak “Sara” Tumfong, right, is spending time with her mother, Suphalak, while waiting for a match for a bone marrow transplant.

Tumfong said Coluccio helped her form a new outlook on life. She is extremely appreciative of her coach’s impact on her.

“Working with Coach Jenny has changed me a lot,” Tumfong said. “I was so pessimistic and full of self-doubt, especially in my golf game. The most important thing she taught me is to be positive. It sounds easy, but it actually is a very hard thing to do. I was improving little by little and finally felt comfortable playing golf again.”

Now, instead of trying to improve her golf game, Tumfong is focused on getting healthy. She left the hospital April 9 and is in remission after undergoing intensive chemotherapy.

Tumfong’s mother, Suphalak, is now able to be with her daughter for the first time since she first came to Toledo from Thailand in early March. The two saw each other only briefly when the COVID-19 pandemic put Sara into mandatory isolation. With Sara out of the hospital, Suphalak can provide motherly support and help as needed. 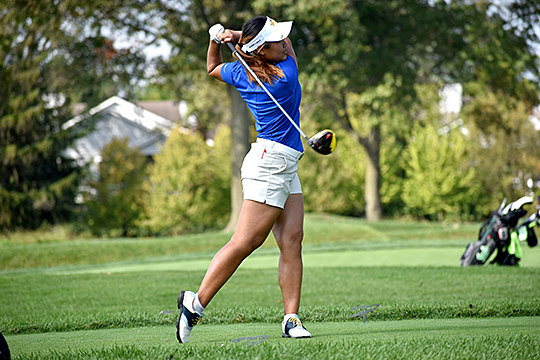 “Having my mom here makes it feel a little like home, even though it’s not,” Sara said. “She cooks Thai food for me every day, and that keeps my appetite high.”

That’s important because Sara still needs to keep up her energy levels. She will need to undergo a bone marrow transplant to cure her leukemia and is still waiting to find a match. Until that happens, she will need to receive consolidation chemotherapy approximately once a month.

One thing that is helping Sara through this trying time is the support she has received from near and far.

“I am so thankful to receive support from everyone,” she said. “There are so many people I don’t even know who have reached out to me and told me that they’re keeping me in their prayers. Of course, Coach Jenny, my athletic trainer Alex [Lovato] and my teammates have been with me since day one. There are so many people I would like to mention and thank, but the list might be too long. I could never ask for a better support system.”

Another thing helping Sara throughout her ordeal has been finishing up her course work in her final semester as a UToledo student. She possesses a 3.794 grade-point average in media communication in the College of Arts and Letters, and will be extremely proud when she receives her diploma. “Earning a degree is like completing one of the huge steps in life,” Sara said. “It feels good to know I am capable of doing something that seems impossible.”

Sara’s battle with cancer has changed her perspective, as well as her future plans. She is counting her blessings and is learning to take her life one day at a time. And being with her family has become even more vital.

“I was originally going to try to find a job here in the United States. It is my biggest dream to work in the media industry,” she said. “However, now I have a new plan of going back to Thailand to spend more time with my friends and family because I don’t know what my future holds.”