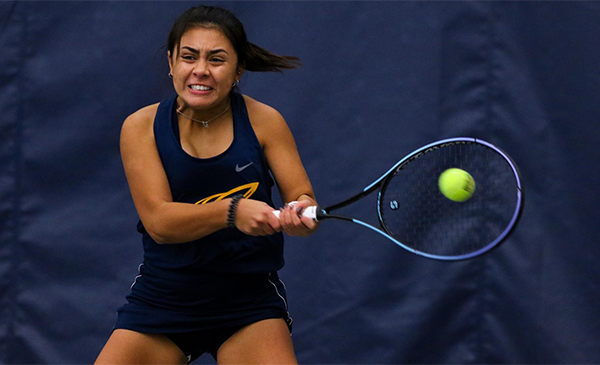 Cassie Alcala is the first Rocket ever to be named MAC Women’s Tennis Player of the Year and earns her second First-Team All-MAC honors in two years.

Alcala is the first Rocket ever to be named MAC Player of the Year, and earns her second First-Team All-MAC honors in two years. The Pickerington native opened the season on a nine-match win streak (Jan. 14-Feb. 19) and ended the regular season with a 21-2 singles record, including a 9-1 mark against MAC opponents from the No. 1 court. Alcala also recorded a doubles record of 15-8 (6-4 MAC) from the top court, mostly with Teske (8-4 together) from the top spot. Alcala collected a MAC Female Scholar-Athlete of the Week (Sept. 29) nod, and two MAC Singles and Doubles Team of the Week honors this season.

“Cassie has worked diligently over the past two years to bring her very best every time she steps onto the court,” head coach Tracy Mauntler said. “I have never had a player who practices more consistently than Cassie, at the highest level, day after day. To win MAC Freshman of the Year in 2021 and then back it up with this is really amazing. Cassie deserves every single award and accolade she receives.”

Teske ended the regular season with a 20-3 singles record with an 8-2 mark against MAC opponents from the No. 2 court, including a 12-match win streak from Jan 14.-March 5. She conjured a doubles record of 13-10 (5-3 MAC), mostly from the No. 1 court with Alcala. The Grand Rapids, Mich. native collected three MAC weekly honors, two for singles and one for doubles. This is Teske’s first First-Team All-MAC honor, having earned second-team accolades in 2021.

“Sloane has become a premier player in the MAC and she just keeps improving,” Mauntler said. “She is unbelievably competitive and a gamer for sure. Sloane is the glue on our team and does a great job of motivating her teammates. After making Second Team All-MAC last year, it was awesome for her to follow it up with a First-Team selection this year. It shows her progress and improvement over the past two seasons. I believe Sloane is one of the top-four players in our conference and we are fortunate to have her as a Rocket.”